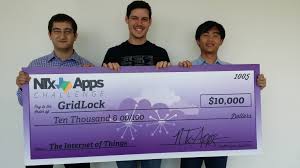 GridLock was developed by Zedd Shmais, James Staud and Nhat Tran. All are seniors from Fort Worth.

“We are elated,” Staud said. “We wanted to do something to ease traffic congestion and reduce traffic jams.”

The system collects information about traffic, and then uses computerized data mining to enhance the timing of traffic lights in real time. See a more complete project description here.

In addition to the prize money, the team will receive mentoring from Jorge Varela, assistant director of TECH Fort Worth, and Gemalto, a sponsoring company. There are no restrictions on how the money can be used.

“We are thrilled. Our hard work has finally paid off,” Shmais said. “We are planning to further pursue this idea and bring the app to the streets.”

The NTx Apps Challenge was a 10-week innovation competition that concluded earlier this month. Its aim was to develop web and mobile apps that solve regional challenges in four major subject areas: water conservation, waste reduction, energy efficiency and transportation.

The UT Arlington team won in the Internet of Things category, which was sponsored by Gemalto. Gemalto is an international digital security company. This category utilized the Gemalto Concept Board or the Gemalto SensorLogic Application Enablement Platform. Submissions in this category also had to address one of the other four challenges.

Eric Becker, senior lecturer, undergraduate adviser for the CSE Department, said he’s especially proud of the team because UT Arlington’s team was only one of five to receive cash awards. There were 18 teams, both from the academic and professional worlds.

Staud also is president of the UT Arlington Mobile Systems Development, or MOBI, team and has started as a National Science Foundation Research Experiences for Undergraduates intern in the Heracleia Lab in the Engineering Research Building.

Shmais is the android program manager at MOBI. He also was on the UT Arlington team that won the AT&T programming competition last year with a $10,000 grand prize. He interned at AT&T Dallas in summer 2014.

Tran also is a MOBI member. He interned at USAA prior to starting the new academic year.

CSE Professor Gergely Záruba​ is the faculty adviser of the MOBI team.

The University of Texas at Arlington is a comprehensive research institution and the second largest institution in The University of Texas System. The Chronicle of Higher Education ranked UT Arlington as the seventh fastest-growing public research university in 2013. U.S. News & World Report ranks UT Arlington fifth in the nation for undergraduate diversity. Visit www.uta.edu to learn more. Follow #UTAdna on Twitter.