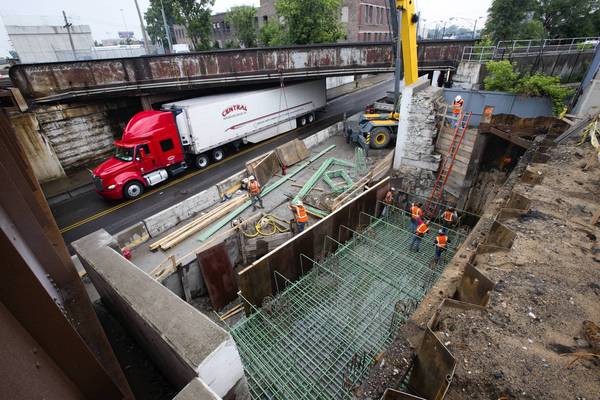 CHICAGO, Oct. 23, 2014 – Federal Railroad Administrator Joseph C. Szabo today joined Illinois Governor Pat Quinn, Senator Dick Durbin and other federal, state and local officials for the dedication of the Englewood Flyover project. The $133 million Flyover, which received $126 million from the Federal Railroad Administration’s (FRA) High Speed Intercity Passenger Rail (HSIPR) Program, will eliminate one of the nation’s largest rail chokepoints.  As a result, close to 80 Metra trains per weekday will now travel above the Norfolk Southern mainline avoiding roughly 60 freight and Amtrak trains that use the mainline. The flyover will provide some relief for rail congestion in Chicago, but much work remains to be done to eliminate the issue completely.

In addition to the intercity passenger benefits, the Englewood Flyover will also reduce freight and commuter delays which will in turn keep more people and freight off Chicagoland’s congested highways. This congestion impacts all modes of transportation, forcing more trucks on to highways, limiting access to airports and reducing the capacity of railroads – limiting the regions effectiveness as a transportation hub.

“The Englewood Flyover will improve safety, efficiency and reliability of the rail traffic passing through Chicago,” said U.S. Transportation Secretary Anthony Foxx. “When Congress provides predictable, dedicated funding for rail investments through the GROW AMERICA Act, we will be able to better address the long-term rail congestion issues that plague Chicago and the nation’s rail network.”

Chicago Region Environmental and Transportation Efficiency (CREATE) Program, a partnership between the State of Illinois, the City of Chicago, freight railroads, Metra and Amtrak, seeks to remove and reduce train congestion throughout Chicagoland.  The Englewood Flyover project is one of 70 projects that make up the CREATE program.  About a third of the projects within the program are completed and today funding only exists for half of the overall program.

“Improving the fluidity of rail congestion in Chicago is critical to ensuring economic growth and developing a passenger rail network that will efficiently connect the 40 largest markets in the Midwest,” said Szabo. “The GROW AMERICA Act will provide the necessary resources to enhance rail service across the country.”

The Englewood Flyover is a grade separation project south of Chicago’s Union Station that ease congestion one of the most delay-prone intersections in the entire Amtrak system. It separates Rock Island District Metra commuter trains from Amtrak passenger trains and freight trains traveling on the Norfolk Southern (NS) corridor and will relieve Metra riders of more than 7,500 annual passenger hours of delay.

The Federal Railroad Administration’s (FRA) mission is to ensure the safe, reliable, and efficient rail transportation of people and goods for a strong America, now and in the future. The GROW AMERICA Act supports this mission with predictable, dedicated investments that enhance safety and modernize our rail infrastructure to meet growing market demand. The Act will invest $19 billion over four years to improve rail safety and invest in a higher performing rail system. States and local communities need the certainty of predictable, dedicated funding to make transportation investments to improve our infrastructure and support our economic growth. The Act also builds on current investments to vastly improve the system in areas ranging from Positive Train Control (PTC) implementation to enhancing flexibility in financing programs that will better enable the rehabilitation of aging infrastructure.

The mission of the Federal Railroad Administration is to enable the safe, reliable, and efficient movement of people and goods for a strong America, now and in the future.