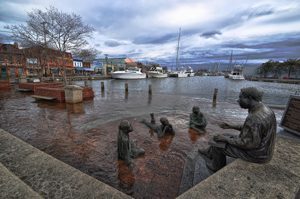 MERRIFIELD, Va., Oct. 21, 2014—Climate impacts are hitting home faster than governments are adapting, but it’s not too late to protect our communities with cost-effective, nature-based approaches for risk reduction, according to a new report from the National Wildlife Federation, Allied World Assurance Company Holdings, LG, and Earth Economics. Natural Defenses from Hurricanes and Floods: Protecting America’s Communities and Ecosystems in an Era of Extreme Weather takes an in-depth look at the growing risks we face from these potentially-catastrophic natural hazards, the policy solutions that can safeguard people, property and wildlife habitats, and local case studies that point the way forward. It calls on America to substantially increase our investments in proactive risk reduction measures at a “Marshall Plan” scale that takes into consideration the growing risks from more intense storms, flooding and sea level rise.

“We cannot and should not have to wait until the next big storm to protect America’s communities and ecosystems in our new era of extreme weather,” said Collin O’Mara, President and CEO of the National Wildlife Federation. “Our preparedness deficit is the result of years of inaction and under-investment at the federal, state and local levels. It’s time for our elected officials to reinvest in our natural defenses and this report offers a blueprint for bipartisan, market-based solutions.”

It was two years ago that superstorm Sandy, a storm climate scientists say was worsened by global warming, slammed into the East Coast, touching 24 states, killing 72 Americans, knocking out power to more than seven million people, and causing an estimated $70 billion in damage. In 2014, we’ve just come off the hottest six-month stretch on record globally and America saw the 9th-wettest summer on record:

“There are obvious financial implications to the insurance industry as a result of extreme weather,” said Scott Carmilani, President and Chief Executive Officer of Allied World Assurance Company Holdings, AG.  “More importantly, insurance carriers need to partner with clients to help them mitigate their risk in the event of hurricanes and floods. It simply makes good business sense to confront this threat now and that’s why we’re working together with conservationists, industry partners and elected officials to find solutions.”

The report analyzes a series of studies showing how taking action now can protect our communities and save money, highlighting how healthy natural systems such as dunes, oyster reefs, barrier islands and wetlands can reduce flood risk more effectively in many cases than erecting levees and seawalls. Among the examples:

“We’re in a new era, both in terms of the extreme weather being caused by climate change and in trying to manage development that’s putting new stresses on our aging infrastructure,” said Mayor Don Ness of Duluth. “As community leaders, we have to be willing to address these issues head on. We have to listen to what the science tells us and put that into action to ensure we’re prepared for the next possible storm.”

Far too many people who live along America’s coasts and rivers are at considerable risk of personal harm from floods and hurricanes, and their properties and economic livelihoods are highly vulnerable as well. Efforts by policy makers to grapple with and respond to these problems have so far been inadequate, but policymakers can make coastal and riverine communities safer and more resilient to floods and hurricanes by focusing on natural and nature-based approaches for risk reduction. For every $1 spent on risk reduction activities, America saves $4 in disaster costs, according to a study by the Multi-hazard Mitigation Council.

“We continue to build our homes and businesses in floodplains and along eroding shorelines, even in places where we know floods occur, while at the same time we’ve damaged or destroyed vast areas of wetlands and other natural systems that not only support treasured fish and wildlife but help buffer communities from flood waters and storm surges,” said Chad Berginnis, Executive Director of the Association of State Floodplain Managers. “By acting now to reverse these trends, our economy, our natural resources, and our communities will all benefit.”

This report identifies seven areas of federal and state law in need of improvement:

Read the full report at NWF.org/News.