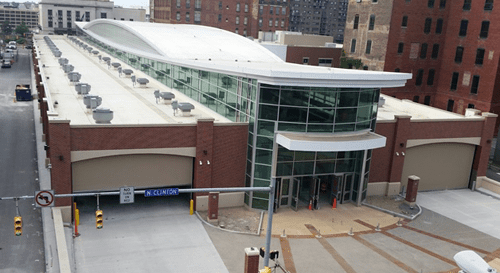 ROCHESTER, N.Y., Oct. 21, 2014 – The U.S. Department of Transportation’s Federal Transit Administration (FTA) today celebrated the opening of the RTS Transit Center, a new transit hub in the heart of Rochester, NY that will greatly improve transit service for thousands of daily bus riders and help spur downtown development. Therese McMillan was joined by Lieutenant Governor Robert Duffy and other state and local officials at a ribbon-cutting event.

“The RTS Transit Center will transform the experience for commuters heading to downtown Rochester,” said U.S. Transportation Secretary Anthony Foxx. “Projects like this are critical for continued, sustainable economic growth, which is why it is so important for Congress to support our GROW AMERICA Act to provide long-term funding for transit systems, roads and bridges nationwide.”

If Congress passes the GROW AMERICA Act, State of New York transit agencies will receive approximately $107 million in Bus and Bus Facilities Program funding in FY 2015. This funding, used to improve bus service and infrastructure, represents an increase of $73 million over the amount provided in FY 2014.

The RTS Transit Center will span a full city block on Mortimer Street in downtown Rochester. Instead of waiting outdoors along Main Street, riders will access 26 new bus bays from a spacious, modern, climate-controlled facility. Getting to the right bus will be easier than ever, thanks to customer-friendly features such as electronic departure signs, an information center, around-the-clock security, and enhanced accessibility for seniors and riders with disabilities.

“More than 60,000 customers depend on RTS every day, and this new facility will offer safer, more convenient access to jobs, education and other important opportunities throughout Monroe County and beyond,” said Acting Administrator McMillan. “Whether the destination is Rochester’s revitalized downtown or a key regional institution, the RTS Transit Center will make it easier than ever for riders to connect to numerous destinations throughout the region.”

As a regional transit hub expected to serve over 20,000 riders daily, the RTS Transit Center will connect residents of the eight county RTS service area to important destinations such as the University of Rochester, Rochester Institute of Technology, Monroe Community College, the Museum District, and a variety of options for shopping and dining. RTS will operate 42 bus lines using a fleet of 350 vehicles through the Transit Center, improving traffic flow throughout downtown and opening up valuable space on Main Street for development.

The RTS Transit Center is scheduled to begin service in late November, five months ahead of schedule. The U.S. Department of Transportation contributed nearly $40 million toward the $50 million project, with the remaining cost shared between the State of New York and the Rochester Genesee Regional Transportation Authority.