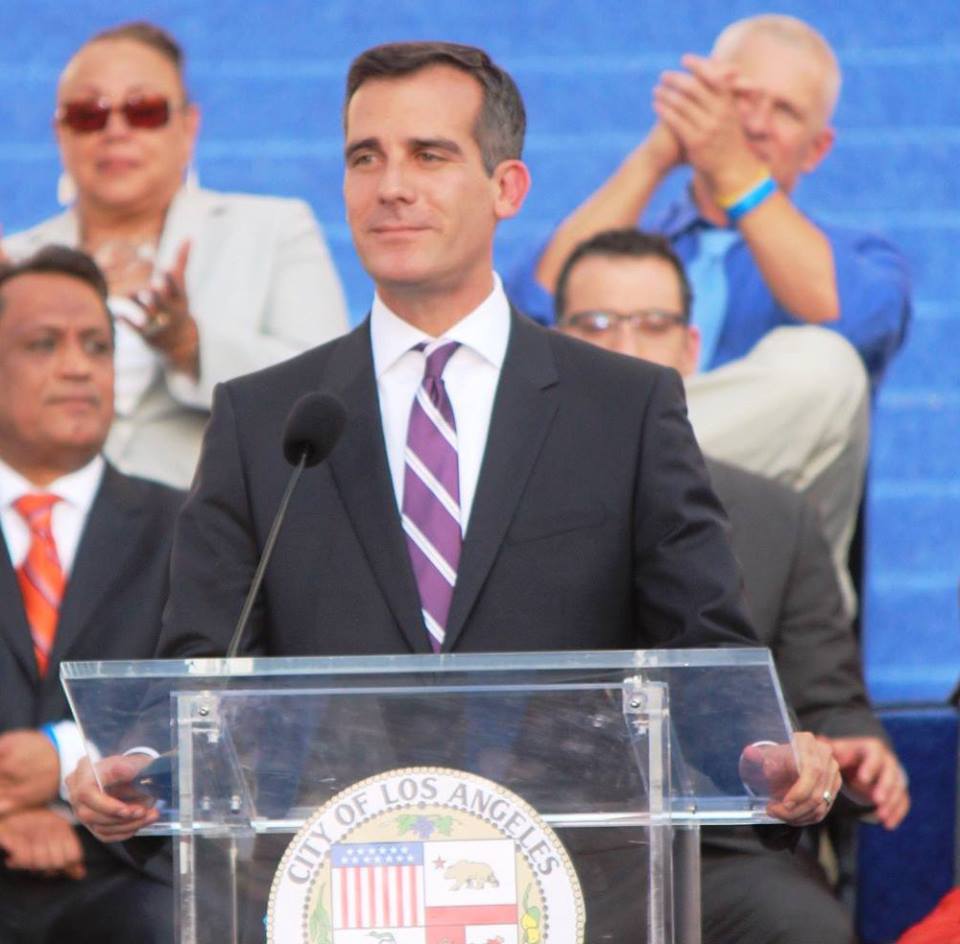 LOS ANGELES, Oct. 14, 2014—Amidst a record drought, Mayor Eric Garcetti today issued an executive directive to dramatically reduce the use of fresh water and the purchase of costly imported water.

“Our relationship with water must evolve. We cannot afford the water policies of the past,” said Mayor Garcetti. “We must conserve, recycle and rethink how we use our water to save money and make sure that we have enough water to keep L.A. growing.”

Mayor Garcetti’s directive requires a reduction in fresh water use by 20 percent by 2017 and in the DWP’s purchase of imported water by 50 percent by 2024. The directive represents a comprehensive approach that addresses supply, use and recycling.

Through the directive, Mayor Garcetti is ordering city departments to sharply cut water use by reducing watering and replacing lawns or other water-intensive landscaping at city facilities, street medians and sidewalk parkways, in addition to increasing city incentives to help L.A. residents do the same, including an increase in the DWP’s turf replacement incentive to $3.75 per square foot. Outdoor water use is a key area to address – it represents 50 percent of residential consumption.

Angelenos are asked to voluntarily reduce watering to two days a week; to use DWP rebates to install low water landscaping and more efficient plumbing fixtures and appliances; and to ensure pools are covered to reduce water lost to evaporation. If targets are not met through the combination of mandatory city actions and voluntary resident actions, residential mandates will be implemented, including new watering, swimming pool and car washing restrictions. Mayor Garcetti urges residents to visit www.lamayor.org/drought for information on how to access incentives and lower their water bills through conservation.

“Keep in mind that reducing water use is not just good for the environment, it lowers water bills,” Mayor Garcetti added. “Right now, we’re paying up to $1,032 per acre foot of water. Conserving that same amount of water through DWP rebate programs costs up to 30 percent less. Reaching our target and reducing per capita water use by 20 percent would save our ratepayers up to $120 million annually.”

“This drought doesn’t appear to be going anywhere any time soon, and it already has serious impacts on all of us living in California,” said Steve Fleischli, Director of the Water Program for the Natural Resources Defense Council (NRDC). “NRDC applauds Mayor Garcetti’s leadership in responding to the drought and climate change with aggressive goals and bold action. The mayor realizes the severity of our local water challenges and is making the smart call – to both reduce water waste today and also invest in 21st century water-saving solutions that will benefit us for the long term.”

“We don’t need to look further than our dried up streams and record droughts in California. The effects of the climate crisis are here, and the Sierra Club applauds Mayor Garcetti for his plan to respond to climate disruption by changing the way we manage and care for our state’s vital water supply,” said Michael Brune, Executive Director of the Sierra Club. “The Mayor’s plan for city-wide water conservation and recycling in Los Angeles will help ensure that we clean up, protect, and wisely use local water sources as demand for water increases and regional supplies decline. It will also help reduce our use of costly imported water, creating a more resilient economy in the future. But even the best water management will not be enough if we don’t quickly move to stem dangerous carbon pollution, and Los Angeles must continue its historic progress toward a carbon free, clean energy economy.”

“We thank the Mayor for his leadership in this drought emergency response,” said Andy Lipkis, Founder and President of TreePeople. “These goals are necessary, and very achievable, as Australia’s people showed us during their historic 12-year drought. TreePeople supports the development of transformative technologies and is taking a delegation of 18 key leaders from the City and County of Los Angeles and the state of California to Australia, later this week, to learn how urban Australian’s achieved extraordinary conservation rates of up to 60% during their drought, and bring those solutions back to our region.”

A coalition of environmental leaders made the following statement today in response to the Mayor’s executive directive:

The signatories to this letter applaud Mayor Garcetti for his bold proposal to increase water conservation in Los Angeles with a 20% reduction in water use by 2017.
As leaders of organizations who are focused on helping Southern California develop sustainable water use practices, we strongly endorse Mayor Garcetti’s call to action. We agree with the Mayor that we all need to act – now.
We thank Mayor Garcetti for his leadership in addressing the drought crisis early enough to avoid unacceptable consequences. We cannot live without water. But water shortages will have a significant impact on public health, on our quality of life, on social equity, and on our pocketbooks.
We support the Mayor for setting measurable water conservation goals that push everyone in Los Angeles – government agencies, private businesses, and all residents – to do their fair share in reducing water waste. We know it may be challenging, but these water conservation goals are well within our reach.
Liz Crosson
Executive Director
Los Angeles Waterkeeper
Esther Feldman
President
Community Conservation Solutions
Steve Fleischli
Water Program Director & Senior Attorney
NRDC
Dr. Mark Gold
Former President
Heal the Bay
Alix Hobbs
President
Heal the Bay
Adi Liberman
President
Coalition for Our Water Future
Andy Lipkis
President
TreePeople
Miguel A. Luna
Executive Director
Urban Semillas
Melanie Winter
Founder & Director
The River Project

In addition, the directive creates the Mayor’s Water Cabinet, which will be chaired by Deputy Mayor Doane Liu and includes the city’s first-ever Chief Sustainability Officer, Matt Petersen, and representatives from the DWP, Bureau of Sanitation, Recreation and Parks, the Metropolitan Water District and the city’s Proposition O Citizens Oversight Advisory Committee. The Mayor’s Water Cabinet will be responsible for ensuring city departments hit targets outlined in the directive and will focus on long-term initiatives to ensure long-term sustainability of L.A.’s water supply, including: