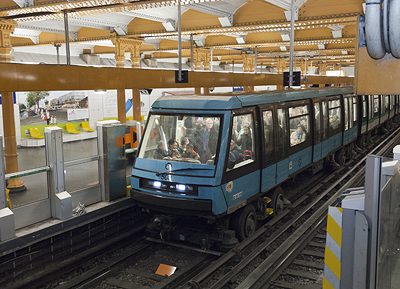 Siemens has received an order from the Paris transit authority RATP (Régie Autonome des Transports Parisiens) to supply the train control equipment and operational control system for the extension of the driverless metro line 14 in Paris. Siemens equipped the original stretch of Line 14 for automatic operation back in 1998 and thus established the first fully automated metro line with driverless trains in Paris. This new section will extend the existing nine-kilometer southbound line by four stations and six kilometers. The order volume is worth around 45 million euros. The line extension is scheduled to be commissioned in 2019.

Siemens has equipped about 250 kilometers of metro lines with signaling technology for driverless operation, making it the world market leader in this field. For the extension of line 14 Siemens will supply the Trainguard CBTC (Communication Based Train Control) type automatic train protection system, which enables driverless operation.

Driverless operation can increase the capacity of a metro line by up to 50 percent because the trains can run at shorter headways. In Paris, automatic operation will achieve a service interval of 85 seconds. If passenger volume suddenly rises – during major events, for example – additional trains can be deployed. These are automatically sent into operation straight from the depot or the sidings, enabling trains to be inserted at short notice into available gaps in the service schedule.

Beside the existing Line 14, Siemens had equipped Line 1 with the fully automatic Trainguard MT train protection system for driverless operation in 2011. Metro Line 1 is the oldest and most heavily frequented underground line in Paris. Linking the east and west of the city along 17 kilometers of track, it carries as many as 725,000 passengers every day. This was the first time that such an important metro line had been automated without disrupting revenue passenger service.

Further information on the Mobility Division may be found at www.siemens.com/about/mobility

Comments are disabled
NEXT ARTICLE
Two Commercial and Five Institutional Projects Honored with Precast/Prestressed Concrete Institute Awards of Excellence
October 13, 2014
PREVIOUS ARTICLE
U.S. and U.K. Building Owners Expect to Increase Their Involvement With BIM in the Next Two Years
October 13, 2014