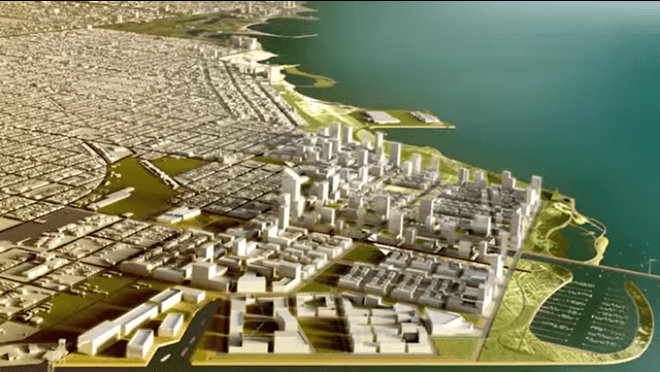 A hundred years ago, one out of every five people lived in urban areas. By 2050, that number will balloon to over four out of five.

This rapid urbanization presents significant problems to the world. Even a modest annual population growth of three or five percent can mean thousands of new inhabitants, and each new resident will require energy, transportation, potable water, food and other infrastructure services that strain finite resources.

Researchers at the U.S. Department of Energy’s Argonne National Laboratory and the University of Chicago are developing tools that merge urban design with scientific analysis to improve the decision-making process associated with large-scale urban developments. One such tool, called LakeSim, has been prototyped with an initial focus on consumer-driven energy and transportation demand, through a partnership with the Chicago-based architectural and engineering design firm Skidmore, Owings & Merrill, Clean Energy Trust and developer McCaffery Interests.  LakeSim began with the need to answer practical questions about urban design and planning, requiring a better understanding about the long-term impact of design decisions on energy and transportation demand for a 600-acre development project on Chicago’s South Side—the Chicago Lakeside Development project. 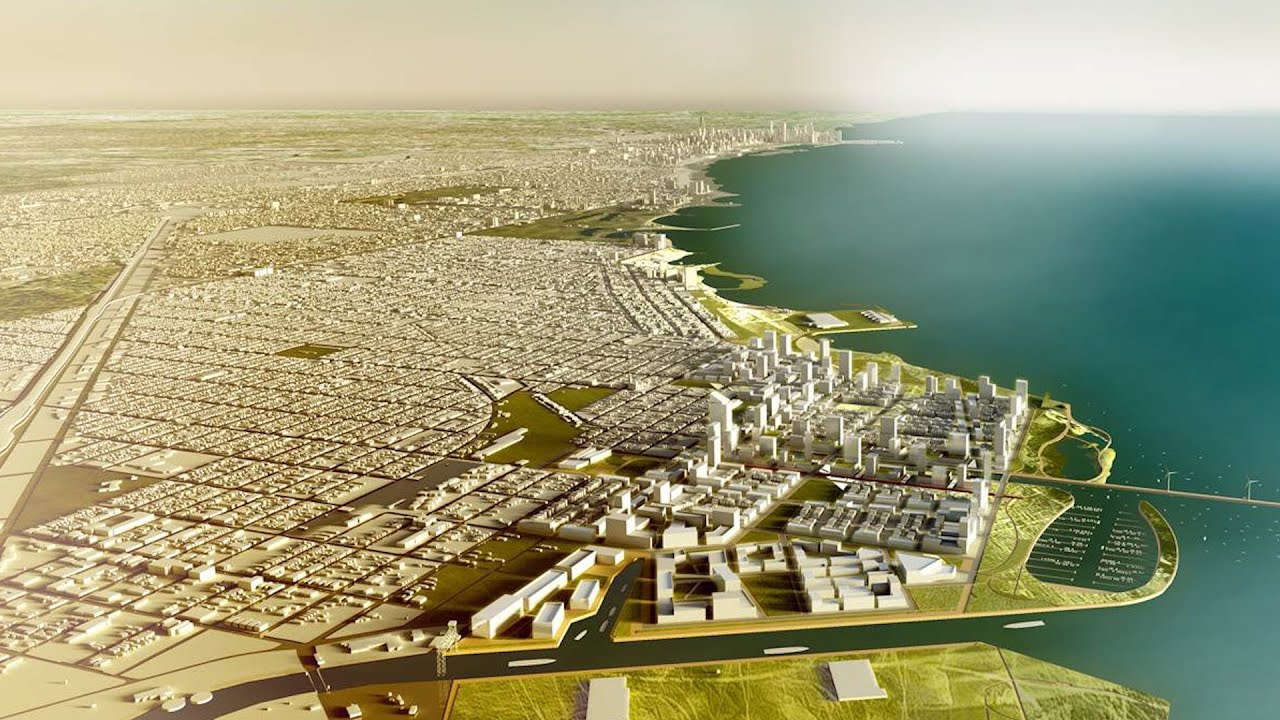 For decades, urban planners and developers have relied upon intuition to guide their decision-making process. But this sixth sense is significantly less effective at larger-scale developments where hundreds of buildings and dozens of interconnected services will reside over the course of decades.

“For a single building, developers have to make decisions based on varying reports from the energy developers, the economic analysts, transportation planners, and others,” said Charlie Catlett, LakeSim CO-principal investigator, Argonne Mathematics and Computer Science division computational scientist and director of the Urban Center for Computation and Data (UCCD). “The challenge is what to do that with hundreds of buildings going in over a 20-year timeframe.”

To address the uncertainty of large-scale planning with so many complex variables, LakeSim creators have prototyped a new platform that seeks to help developers plan at massive scales while anticipating the ability to build in future scenarios such as climate change, improved efficiency in buildings and transportation systems and increased renewable energy and/or micro-grid applications.

Large-scale planning is both an art and a science. Planners want a pleasing cityscape, but buildings must also provide for specific residency or occupational purposes.

LakeSim employs the specifications of dozens of building design types supplied by sources ranging from Department of Energy data libraries to Skidmore, Owings & Merrill. Each building type features unique structural parameters, allowing designers to pick and choose different types and place these in a virtual map. With an emphasis on integrating scientific and engineering models into platforms used by industry, the project selected CityEngine, an interactive 3-D design system from Redlands, CA-basedEnvironmental Systems Research Institute (ESRI), as the central component of LakeSim. ESRI supplies geographical information system software that allows organizations and industries to question, analyze and interpret data that reveal relationships and trends with 3-dimensional computer models.

CityEngine serves as the “dashboard” through which the urban designer interacts with the city designs. Computational models can be invoked to analyze changes with respect to energy demand over time, and the developers are looking to integrate other models.

The future goal of this map is to create an interconnected virtual city where changes to plans can be analyzed in real time instead of weeks.  Planners can refine and monitor development progress as individual buildings aggregate into zones, and zones etch out residential and commercial borders. With this in mind, one of the most important sectors where LakeSim hopes to assist in decision-making is energy.

The power streaming into our homes and businesses is a balanced coordination between energy suppliers and energy producers. To provide planners with better energy demand forecasts throughout the life of the development, LakeSim employs the Energy Performance Standard Calculation Toolkit (EECalc) developed by Argonne and the Georgia Institute of Technology. 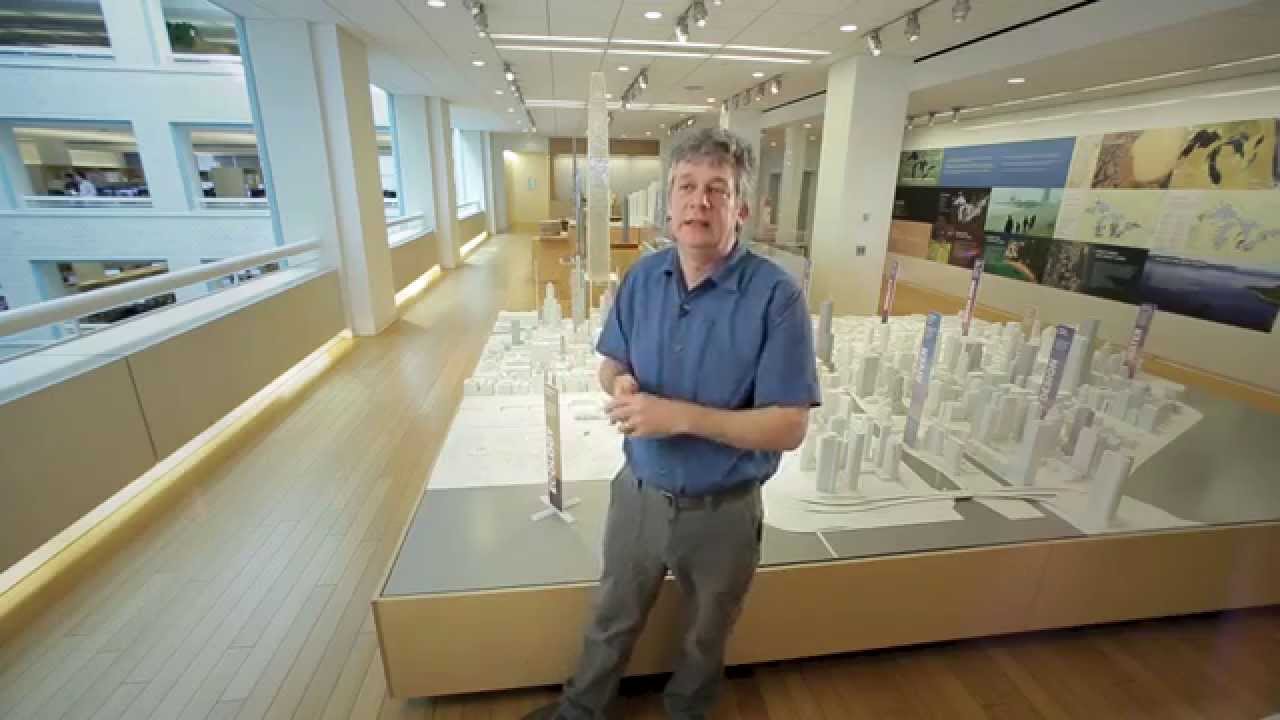 EECalc generates monthly estimates of a building’s, or block’s, thermal energy demand and consumption for heating and cooling. As each structure has unique architectural features, they also have unique demands on energy. Based on a number of end-user factors, including ventilation, lighting and heating and cooling, EECalc can assess the energy efficiency of an architectural design.

“We have been working on energy assessment analytics for a number of years,” said Guzowski, “and we have developed and continue to refine key data points that are needed to forecast energy use under different conditions.

“It will be especially interesting to turn our attention to determining economically viable supply-side options that minimize future global impact, and to do so in a way that is not constrained by conventional infrastructure bounds,” she said.

As LakeSim calculates the interconnectedness between each part of the plan, users can make structural changes and see in real time how this affects energy demand and supply for the block, or for the entire region.

“LakeSim is a very nice bridge between real-estate developers and architects,” said Ed Woodbury, president of Chicago-based property development McCaffery Interests. ”It helps us identify and solve problems encountered by designers so we can come up with real-world solutions.”

Currently, data assimilation and modeling is typically performed using desktop machines. But as you can imagine, providing real-time calculations affecting hundreds of thousands of parameters that exist in an urban environment takes a lot of computing power. Perhaps in the future, a tool such as LakeSim could require resources located at the Argonne Leadership Computing Facility, which houses Mira, currently the fifth fastest supercomputer in the world.

With this computing power, urban planners could better anticipate extreme weather or power outage events and build safeguards into the structures and energy systems they design. Imagine a power outage on Fifth Avenue during the daytime in July of 2045. By running a multitude of scenarios, and determining how each structure and block responds to certain events, planners could optimize the balance of energy with more solar or wind power, or increase energy storage capacity to a particular section of a city development, minimizing the effects of major weather or energy events.

This would give energy producers and builders a more scientifically rigorous range of potential energy demands in the near and far future in minutes, allowing them to better anticipate the need for renewable and traditional forms of energy before they lift a shovel.

“These tools are really based on looking at lots and lots of different scenarios to provide any developer in the world with science-based insight about the long term consequences of design decisions,” said Woodbury. “Without such tools, rapid urbanization will be guided by 20thcentury ‘educated guess’ urban design principles. That process may have worked in the past, but it’s not going to produce the cities that we need for the 21st century and beyond.”

Argonne National Laboratory seeks solutions to pressing national problems in science and technology. The nation’s first national laboratory, Argonne conducts leading-edge basic and applied scientific research in virtually every scientific discipline. Argonne researchers work closely with researchers from hundreds of companies, universities, and federal, state and municipal agencies to help them solve their specific problems, advance America’s scientific leadership and prepare the nation for a better future. With employees from more than 60 nations, Argonne is managed by UChicago Argonne, LLC for the U.S. Department of Energy’s Office of Science.

DOE’s Office of Science is the single largest supporter of basic research in the physical sciences in the United States, and is working to address some of the most pressing challenges of our time. For more information, please visit science.energy.gov.