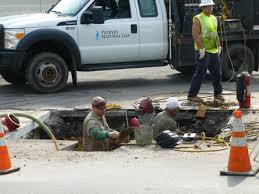 “We’re pretty excited about the project,” PNG director of IT Applications Joe Brado said. “It’s really going to be a big improvement, allowing our work forces to operate as one unit.”

The integration platform, Esri’s ArcGIS, will enable PNG to spatially locate all assets and field crews in near real time. More strategic deployment of repair crews, faster maintenance and inspections, and even faster customer service means PNG will potentially deliver its strongest services. The potential for a stronger utility was part of the reasoning behind both mergers.

“It’s huge,” Brado said. “We’re going to be able to operate all of our field people as one combined work force rather than these three separate work forces.”

Another product of the integration will be updates to PNG’s mobile abilities. Field-workers will be able to push updates—on maintenance, inspections, repairs, households, and commercial buildings—to the office in real time.

“Even if we hadn’t acquired these other companies,” Brado said, “we’d still have had a need to replace our current system with something more up-to-date—and that probably would have been Esri as well.”

Learn more about Esri technology for gas utilities at esri.com/gas.