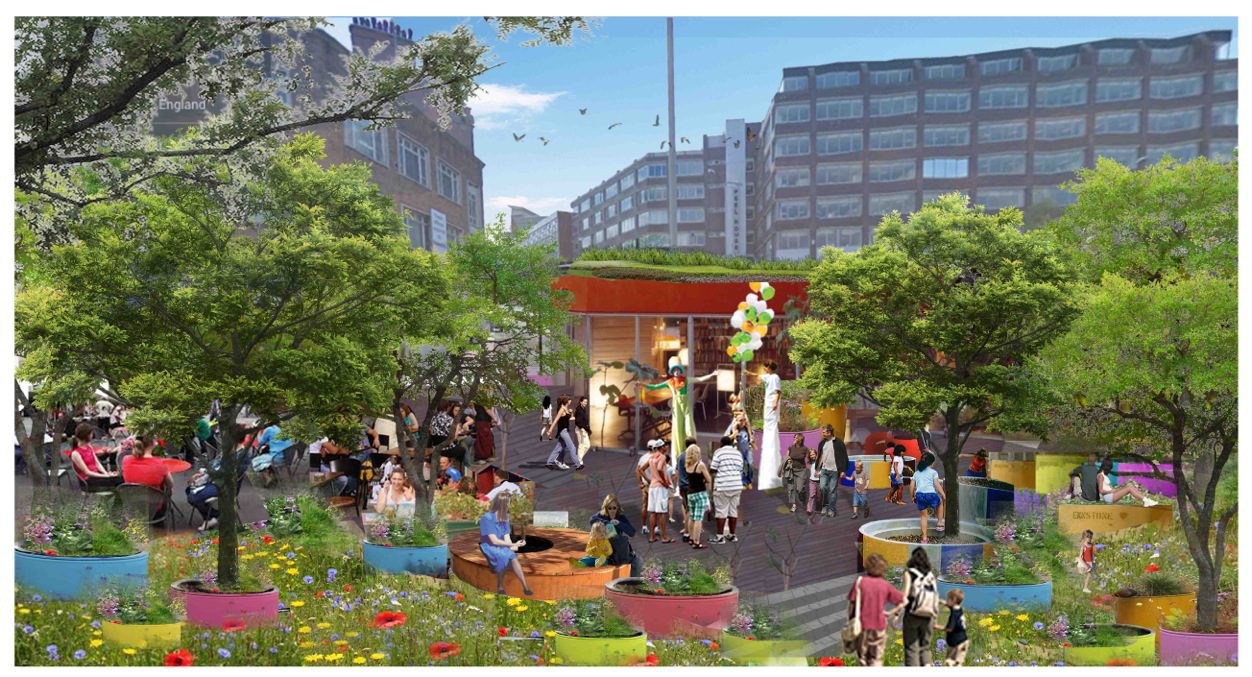 SHEFFIELD, England, Oct. 8, 2014—A disused heart-shaped plot of land in Sheffield city centre will be transformed into a radical new eco-park filled with wildflowers and UK native plants if it wins a bid for £120,000 lottery funding through a national competition.

The University of Sheffield’s Love Square scheme is one of five projects shortlisted for the chance to win cash from the Big Lottery Fund through the Grow Wild initiative, led by the Royal Botanic Gardens in Kew, which is now open for a public vote.

Love Square, the innovative mobile eco-park proposed by Sheffield, will put a living heart-shaped garden back into the city by transforming a derelict site into a vibrant wildflower meadow teaming with wildlife.

The Love Square design has been led by Professor Nigel Dunnett from the University of Sheffield’s Department of Landscape. Professor Dunnett previously created the world-famous wildflower landscapes at the Queen Elizabeth Olympic Park in Stratford.

He said: “We’re hugely excited about this project, which is all about rethinking the boundaries between urban spaces and nature. For more than 100 years we have been weaned on the idea that pristine urban environments that are carefully manicured are a good thing. And we’ve thought that nature is scruffy, untidy and wild. This thinking urgently needs to change.
“Love Square is a new type of ‘Smart’ urban nature park: colourful, modern and strongly designed. It will lead the way in showing that it is possible to have a city space that is great for nature and the environment, but which is also fun, contemporary and forward-looking. We desperately need to change the way we view nature in the city”.

He added: “I very much hope that people will take our detailed drawings and nature templates and start their own urban schemes. The centres of cities are fluid spaces that change as dramatically as the fields around them. By creating moveable and modular components, we can bring nature and wildflowers into the very heart of our inner cities.”

The 2,000 square metre site will feature a series of modules each containing different types of wildflowers, edible and productive plants. The moveable modules mean that the site can be easily replicated, re-mixed, changed or moved to other parts of the city, creating a unique and versatile space.

“In a way I see this project as a real part of the Olympic legacy which I am proud to play a part in”, said Professor Dunnett.
“The Olympics sowed many seeds and Love Square is one potential example. In a way it’s as though Jessica Ennis, a Sheffield alumnus, has thrown a seed-covered javelin from East London to the heart of Sheffield.”

Love Square features a community café made from converted shipping containers with wildflower green roof, and a living wall of native climbing plants Outdoor seating areas are surrounded by colourful wildflower meadows. A mini wetland soaks up rainwater after storms, helping to prevent flooding. Love Square will be lined with an edge of bird-friendly trees, and will be full of artworks. Love Square will be a colourful community space bringing social and economic benefits to a neglected part of the city: a go-to place for all of Sheffield.

The project has received the support of modern-day ‘Johnny Appleseed’ and ‘renegade gardener’ Ron Finley from South Central, Los Angeles.
Ron, who sparked a revolution when he began planting food on a grass verge outside his home, visited the site during a trip hosted by the University of Sheffield during its Festival of the Mind.

He said: “I see Love Square as a place for people to stop and think – where they can enjoy nature and be a part of nature. I think it’s going to be a magical experiment in combining the urban with the garden.

“Love Square is the perfect name for it. It brings love into the environment and it’s going to be so sexy to have this happen.”

He added: “This isn’t just for Sheffield. We want this all over the country – all over the world. With your vote we can start making this happen.”

The eco-park at Love Square will form the hub of another regeneration project: Grey to Green, which will transform 1.3km of a redundant dual carriageway into a green cycle and pedestrian route.

Supported by the Big Lottery Fund and led by Royal Botanic Gardens, Kew, Grow Wild inspires communities, friends, neighbours and individuals across the UK to come together to transform local spaces, by sowing, growing and enjoying native wild flowers.

The winning site will be chosen by a public vote. Voting takes place online and by telephone from 8am on October 7 – November 4.

The public can vote for Love Square online at vote.growwilduk.com

The University of Sheffield

With almost 25,000 of the brightest students from around 120 countries, learning alongside over 1,200 of the best academics from across the globe, the University of Sheffield is one of the world’s leading universities.

A member of the UK’s prestigious Russell Group of leading research-led institutions, Sheffield offers world-class teaching and research excellence across a wide range of disciplines.
Unified by the power of discovery and understanding, staff and students at the university are committed to finding new ways to transform the world we live in.

In 2014 it was voted number one university in the UK for Student Satisfaction by Times Higher Education and in the last decade has won four Queen’s Anniversary Prizes in recognition of the outstanding contribution to the United Kingdom’s intellectual, economic, cultural and social life.

Sheffield has five Nobel Prize winners among former staff and students and its alumni go on to hold positions of great responsibility and influence all over the world, making significant contributions in their chosen fields.