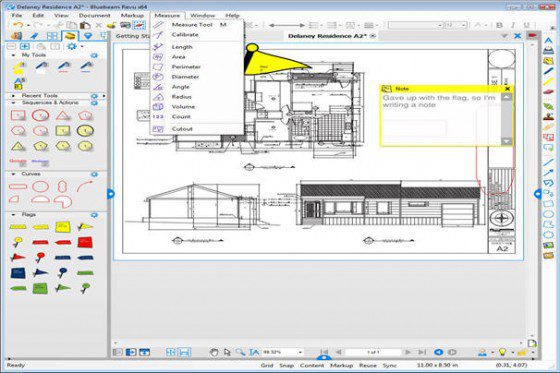 Bluebeam is a leading provider of PDF-based workflow solutions for digital processes and collaboration in the AEC (Architecture, Engineering, Construction) industry with more than 650,000 users worldwide. In the 2013 financial year, Bluebeam generated revenues of approx. US $22.4 million, which corresponds to a 48% growth over the previous year. In the first half of 2014, Bluebeam continued on an accelerated growth path and generated revenues amounting to US $16.5 million. The operating result (EBIT) in the first half of 2014 was US $3.2 million. Bluebeam has been recognized on Deloitte’s Technology Fast 500 as one of the 500 fastest growing technology, media, telecommunications, life sciences and clean technology companies in North America and named on the Red Herring Top 100 North America list.

Its customers include more than 74% of top US companies in the construction industry, according to industry rankings by Engineering News-Record. In addition, Bluebeam increasingly addresses a major market potential of companies from the sectors of oil and gas, utilities, manufacturing and government. According to the company’s own calculations, the use of Bluebeam solutions increases productivity by 60%, reduces the costs of paper and distribution by up to 85%, and leads to a reduction of schedules of 40%.

The desktop, server-based and mobile solutions address document-intensive industries and administrations for the digitalization of workflows. The PDF-based technology combines the process steps of “create – comment – collaborate – organize” in growing workflow automation. The intuitive and flexible solutions are used, for example, in all phases of the building process – from designing to bidding and the awarding of contracts all the way to the building stage and management. As a result of the provision of digital and paperless workflows, the platform technology called “Bluebeam Revu” considerably improves collaboration of all parties involved in the construction project.

“Bluebeam is a perfect complement to our solution portfolio for the entire building process and the life cycle of objects with the addition of drawing-based processes to our model-based BIM workflows. As a result of the acquisition, we reinforce our goal of rising to become the world-leading provider of open standards in the AEC market,” says Patrik Heider, CFOO and Spokesman of Nemetschek AG.

Market presence and customer base in North America considerably strengthened

With the acquisition, the Nemetschek Group not only extends its solution offering strategically but also reinforces its international market presence especially in North America. At the same time, as a result of Bluebeam, additional customer potential is within reach for the strong CAD brands from the Design segment. Bluebeam, in turn, will profit from Nemetschek’s stronger presence in Europe and Asia.

“North America is a very important and rapidly growing sales market in which we currently generate about 10% of our revenues. As a result of the acquisition of Bluebeam, we are taking a leap forward and considerably strengthening our market position,” continues Patrik Heider. “At the same time, in North America, we are gaining qualified employees, a well-known brand with great software and marketing know-how and a large customer base.”

“Today is an exciting day for Bluebeam Software and Bluebeam users alike,” said Richard Lee, Bluebeam Software CEO. “With its Open BIM philosophy, Nemetschek is committed to making project information available to everyone, a belief strongly held by Bluebeam as well. I look forward to working together to make digital project collaboration more transparent and easier to access by all parties from design, build to operate.”

Bluebeam was founded in 2002 and has about 150 employees. In addition to its headquarters in Pasadena, the company has offices in San Diego, Chicago and Manchester. Sales are made online, via direct sales and a network of about 180 resellers worldwide.

In keeping with the strategic alignment of the Nemetschek Group, Bluebeam will continue to be led by its current management as an independent brand company in the future.

The purchase price of the acquisition amounts to about US $100 million (cash-/debt-free). Financing is provided by the company’s own capital resources and the taking out of a loan. The purchase price includes earn-out components, which are linked to the increase in revenues and profitability in the financial years from 2014 to 2016. According to today’s perspective, earn-out payments of approx. US $3.5 million are anticipated. The acquisition is subject to the approval of Bluebeam’s shareholders and is expected to be closed in October 2014.

Nemetschek, Munich, is a globally leading software provider for the AEC (Architecture, Engineering, Construction) industry. With its 11 brands, the Nemetschek Group now serves more than 1.2 million users in 142 countries from more than 40 locations worldwide. Founded in 1963 by Professor Georg Nemetschek, the company focuses on innovations such as Open Building Information Modeling (Open BIM) for the AEC market of tomorrow. Publicly listed since 1999 and quoted on the TecDAX, the company achieved revenues of EUR 185.9 million and an EBITDA of EUR 46.3 million in the 2013 financial year.