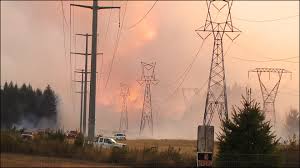 REDLANDS, Calif., Oct. 6, 2014—Wildfires raged across Northern California and southern Oregon in August. But thanks to a new map application, two local utilities were able to monitor and protect more than 16,000 miles of transmission lines that serve nearly two million customers.

PacifiCorp GIS Solutions developed the app specifically to monitor wildfires for Pacific Power and Rocky Mountain Power. The intensity and direction of the early August wildfires clearly threatened three lines—one of which was de-energized and two of which lost power and sustained damages.

“Not a single customer lost power due to the fire,” said Marshall Payne, GIS Support Services Director at PacfiCorp. “Mother Nature is difficult to predict, but thanks to a well-designed system and contingency planning, customers retained power even when damage was sustained.”

PacifiCorp is responsible for more transmission lines in the West than any other single entity. Its app draws on real-time data fed to it by government agencies, including the National Aeronautics and Space Administration (NASA) and the US Forest Service. Every four hours, the app pushes an updated, data-driven map of new and existing wildfires to risk-management and operational staff at the utilities. When a situation like the August fires erupts, the staff can e-mail decision makers a clean PDF capturing the live threat to transmission lines.

“There was no way to easily visualize transmission infrastructure in proximity to wildfires,” Payne said.

The app draws on ArcGIS technology to translate government data into live mapping. It has proved so efficient that the app has since been repurposed into two new versions to produce seismic-activity and flood alerts.

Learn more about Esri technology for transmission utilities at esri.com/transmission.