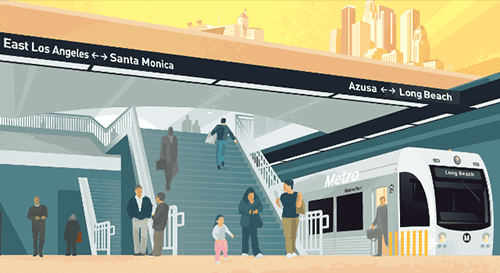 The two-mile rail segment will offer thousands of area residents more efficient and convenient access to jobs, education, and other ladders of opportunity. Secretary Foxx was joined at the event by Los Angeles Mayor Eric Garcetti and other state and local officials.

“Transportation is about more than getting from one point to another—it’s about getting from where you are to a better life,” said Secretary Foxx. “Today’s milestone is one to celebrate, but we need to do more to deliver these projects more quickly and efficiently, and the one thousand combined federal, state and local permits to get the light rail from ground breaking to ribbon cutting is simply too much. The GROW AMERICA Act would help reduce that burden by streamlining portions of that process.”

The Administration’s GROW AMERICA Act is a $302 billion, four year transportation plan that is fully paid for without adding to the deficit. The GROW AMERICA Act also would cut red tape and speed project delivery.

According to the Los Angeles County Metropolitan Transportation Authority (LACMTA), in order to build and run the Regional Connector, the project sponsor and contractors will have to apply for approximately one thousand permits—federal, state, and local combined. Complex projects like the Regional Connector often require multiple agencies to review them.

GROW AMERICA would simplify and speed up this process by ensuring that federal agencies work together sooner, coordinate their reviews, and cut red tape. And it would make permitting more transparent so that federal agencies are held accountable for their progress. The bill also would help state transportation agencies use federal funds to hire dedicated staff to help speed environmental reviews.

The LACMTA has begun work on the underground connection between the existing Metro Gold line in Little Tokyo and the Exposition and Blue light rail lines, which currently terminate at Flower and 7th Streets. The project also includes four new light rail vehicles to augment the existing fleet. The project will reconfigure Metro’s three existing LRT lines into two lines, one primarily running north to south, and one east to west. The project reconfiguration will eliminate the need for riders to make cumbersome transfers from light rail to the Metro Red or Purple Line subway system, and then back onto light rail, to reach their destinations.

“With just two miles of added light rail in downtown Los Angeles, it will become possible to offer a one-seat ride across the county, and the new stations will make transit easier to get to for people living in the surrounding neighborhoods,” said FTA Acting Administrator Therese McMillan. “The President’s GROW AMERICA Act would enable us to invest in more good projects like this one—putting jobs, education, and healthcare within reach of more Americans.”

LACMTA estimates the Regional Connector will open in 2020 and initially handle roughly 60,000 trips or more each weekday. The $1.4 billion project received a $670 million full funding grant agreement through FTA’s Capital Investment Grant (New Starts) Program, as well as a loan of up to $160 million from the U.S. Department of Transportation’s (DOT) Transportation Infrastructure Finance and Innovation Act (TIFIA) loan program, and $64 million in other DOT funds. The remainder of project will be funded with state and local resources.

Secretary Foxx also announced today that LACMTA is receiving a $1.7 million grant from FTA’s Ladders of Opportunity Initiative. The grant will allow the agency to improve four bus stops on Cesar Chavez Avenue next to Los Angeles Union Station, repair broken sidewalks that provide access to them, and install new bike parking and bike share stations. More than 80 percent of the people who frequently use those stops lack access to a car, and 90 percent of them either walk or bike to the bus stops, according to LACMTA. The improved transit access will also help construction workers building the Regional Connector who take transit to reach their worksite.

LACMTA is one of 24 recipients competitively selected through this initiative to help public transportation systems modernize and expand transit bus service specifically for the purpose of connecting disadvantaged and low-income individuals, veterans, seniors, youths and others with jobs, employment centers, local workforce training, health care and other services.

FTA is advancing two other major transit expansion projects in the Los Angeles metropolitan area: the Crenshaw/LAX light rail transit corridor project and Section I of the Westside Purple Line Extension. The $2 billion Crenshaw project, which broke ground in January, is funded in part with a $545.9 million TIFIA loan and approximately $130 million in other FTA and DOT funds. DOT has approved a TIFIA loan of up to $856 million for the Westside project, which is also received funding through FTA’s Capital Investment Grant Program in May of 2014.