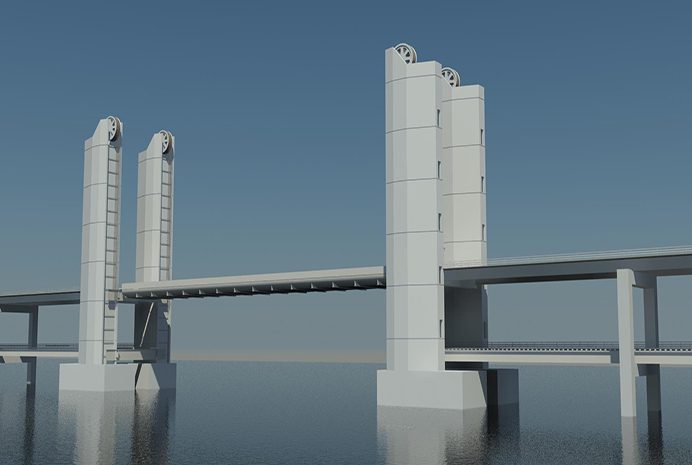 AUGUSTA, Me., Sept. 26, 2014 – The Maine and New Hampshire Departments of Transportation have reached a tentative price agreement with Cianbro Corporation of Pittsfield, ME for the replacement of the Sarah Mildred Long Bridge in Kittery. The $158.5 million construction cost agreement is a major milestone in the project which is scheduled to begin in late 2014.

“This bridge is critical to Maine’s economy,” said Governor Paul R. LePage. “I am pleased the two states have tentatively agreed on a price, and I’m just as pleased an outstanding Maine company such as Cianbro will be employing hard working people to construct this new bridge.”

This bridge is the second most significant bridge for Maine. In addition to its daily traffic, it serves as the only backup to the I-95 high level bridge which is responsible for a high percentage of the state’s gross domestic product traveling into Maine.

“We are satisfied with this tentative agreement,” said MaineDOT Commissioner David Bernhardt. “Through tough negotiations on behalf of the taxpayers, a fair price for the replacement of this bridge was reached and I am confident the residents of Maine and New Hampshire will be proud of the work to come.”

In August of 2012, Governor Paul R. LePage and the Federal Highway Administration approved the innovative use of CM/GC (Construction Manager/General Contractor) Procurement Method that allowed MaineDOT to hire Cianbro, Inc.to provide feedback during the design phase of the bridge prior to the start of construction. Cianbro Corporation is well known for their electrical and mechanical expertise with movable bridges.

In November of 2012, Figg/Hardesty and Hanover signed a contract to design the new bridge as well as coordinate shareholder and public input meetings to see what local residents wanted reflected with the bridge design. The public input, consisting of the communities of Portsmouth, NH and Kittery, ME as well as the Portsmouth Naval Shipyard, Albacore Park, and neighborhood groups, was invaluable. A final theme was developed to define the context for creating the bridge shape and features, which was “Local Simplicity of the Working Waterway.”

The new bridge was designed with long open spans using eleven fewer piers than the existing bridge. In addition, faster and fewer openings of the bridge due to its increased height for marine traffic means there is less disruption to the traveling public. There is a state of the art vessel collision system to reduce damage if ships strike the piers as well as a mechanical system driving the towers that reduces long term maintenance needs.

In early September, a $25 million TIGER Grant (Transportation Investment Generating Economic Recovery) was awarded to both states to fund the rail portion of the bridge that will serve as the key component to moving nuclear material out of the Portsmouth Naval Shipyard.

Construction of the new Sarah Mildred Long Bridge is slated for late 2014 with the new bridge expected to open to motorists in August of 2017.