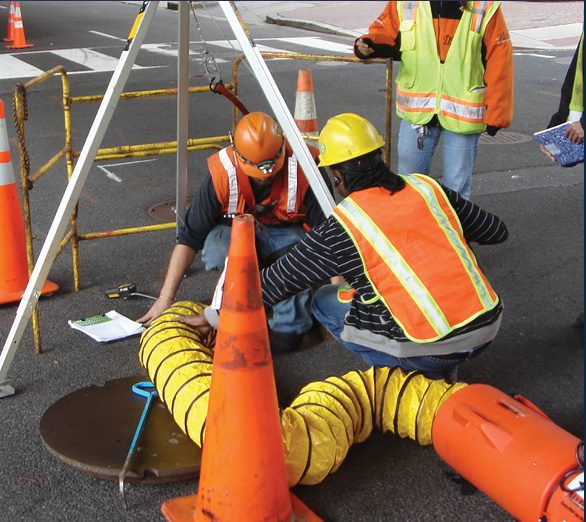 Precision Valley Communications (PVC), a premier supplier of communications network mapping and engineering to the broadband industry, was five months into a project to survey and redesign a hybrid fiber-coaxial (HFC) network for a major cable company in Washington, D.C. Despite over 25 years in the business and 400 years of combined field mapping experience, things weren’t going well. “We had four highly productive drafters using software that competes against Bentley’s hybrid fiber-coaxial (HFC) network engineering solution, and it took them five months to post 122 miles of as-built survey drawings,” explained John Notarangelo, Director of Business Development at PVC. With only 21 percent of the 586 miles of survey completed, this USD 145 million project was way behind schedule. “Missing the schedule deadlines meant the funding would be pulled and the project terminated,” he added. “Without the field as-builts done, we couldn’t complete the redesign in time to submit for permit approval by the city.”

To be fair, PVC faced an unusually complex set of project challenges. For example, the team had to physically survey 2,400 of the city’s 3,167 manholes while adhering to the District of Columbia’s traffic control regulations – no small task. In addition, they had to physically survey nearly 225,000 multiple dwelling units, including high-profile and high-security sites such as embassies and congressional staff offices.
Each of these locations required special preparations just to gain access.

Despite the scope and complexity of the survey, PVC’s management team knew the delays weren’t the result of a labor skill set issue. “We’d assigned four of our best drafters to convert the field survey notes into as-built drawings,” noted Notarangelo. “After analyzing the situation, it was clear that our biggest productivity obstacle was the software tool that our client mandated we use to document and design.” Choosing the Right Tools for the Job

Using this non-Bentley software, PVC’s drafting team experienced significant workflow impediments. This was due in part to an inefficient integration with the enterprise spatial database, which resulted in time-consuming database transactions. For example, deleting a network tap triggered the software to validate the data integrity of every piece of upstream equipment in the database, which could take up to 10 minutes or more. If one of the calculations was found to be out of spec, the user would have to make another change and incur additional delays. These constant workflow interruptions crushed design productivity.

Looking ahead, management could see that if they were forced to use the client’s specified software for the design phase of the project, the design team would experience these same types of inefficiencies yet again. “It was clear that if we wanted to be successful, we needed more efficient software tools.”

As a long-time user of Bentley software, PVC knew it could dramatically increase productivity by having drafters use Bentley’s HFC network engineering solution – specifically Bentley Coax and Bentley Fiber. “When our highly demanding deadlines were becoming tighter and our initial design approach had to be abandoned, the only clear choice was to move to Bentley’s communications products,” stated Notarangelo. Bentley’s HFC solution provided a unique, seamless CAD and open GIS environment that would allow drafters to efficiently design and manage network infrastructure – and make up for lost time.

PVC also knew that the Bentley HFC solution offered two key advantages. First, it was built for optimized integration with Oracle Spatial. As a result, all network properties and geometries could be persisted and managed in Oracle Spatial through an optimized process that minimizes time-consuming database transactions to enable rapid layout, verification, and posting of network designs. Second, the Bentley HFC solution offered the precision and productivity of an industry-proven CAD platform, which was critical to the success of this project. Specifically, the solution leverages the MicroStation platform to supply the drafting productivity tools and engineering precision for fast layouts, and it can be used to produce high-quality construction prints directly from the design environment.

PVC was confident that by using the Bentley HFC solution, they could achieve the productivity and efficiencies needed to complete this project on schedule. Once this information was shared with the client, PVC was able to successfully convince its client that the switch to Bentley software was necessary. Getting Back on Track

Leveraging Bentley Coax and Bentley Fiber software, PVC experienced an immediate increase in productivity. While PVC’s drafters had to essentially start over and re-do prior work, they were able to quickly make up the time. Notarangelo explained: “Using the competing software product and four highly productive drafters, it took us five months to post 122 miles of as-built survey drawings. After switching to Bentley Coax and Bentley Fiber, those same resources completed approximately 400 miles in approximately seven weeks.”

This amounts to an impressive tenfold increase in drafting productivity that ultimately allowed PVC to meet the production schedule for the survey and documentation phase of the project – and thus secure the redesign phase.

PVC’s use of Bentley software also yielded significant productivity gains during the design and modeling of the new network infrastructure. During the redesign, PVC was able to address the need to move all equipment from manholes to breakout pedestals located on front easements, reducing the amount of rented duct space needed and increasing accessibility for troubleshooting and maintenance. In addition, they could complete designs quickly to facilitate timely permitting and avoid construction delays.

For example, using Bentley’s optimized integration with Oracle Spatial, PVC designers could perform near real-time engineering calculations for optical link loss budget analysis, RF signal quality, and powering optimization and have immediate design verification. This enabled a very fluid design workflow and rhythm that facilitated a rapid network layout. In addition, the MicroStation-based CAD environment and HFC-specific workflows boosted productivity and helped drafters avoid the errors that occurred with prior software due to excessive flexibility in the user interface.

Notarangelo noted that by moving from the initial design solution to a Bentley solution, PVC was able to save over 20 months of time – equivalent to 18 thousand man-hours drafting as-built survey data and design construction drawings, including permitting. This 80 percent reduction in required labor, which is based on having four to six design drafting engineers working full time on the project, resulted in a savings of over USD 1 million in design, drafting, and permitting efforts.

“Without moving to Bentley solutions, our design engineers would have taken five times longer to complete the as-built survey and the final design,” concluded Notarangelo. “Bentley’s software was the ultimate missing link to our successful performance on this project.”

At the same time, thanks to this massive productivity increase, PVC’s expert engineers met the demanding project schedule milestones, secured ongoing funding for the project, and enabled one of the leading U.S. cable companies to deliver the highest and most reliable broadband network to important government offices, businesses, and high-profile residents in the United States capital.

Victor Alvarez is a product management and product marketing professional with over 18 years of experience in high-technology environments. He is Senior Manager, Applications Advantage at Bentley Systems where his responsibilities include the company’s utilities, communications, electrical, and mining product lines. Alvarez holds an Master of Science in Systems Architecture and Engineering from the University of Southern California and an MBA from the UCLA Anderson School of Management.