/ Announcement / 3D City Models: “No Longer Just for the Sake of It”

3D City Models: “No Longer Just for the Sake of It” 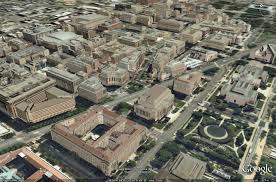 BERLING, Germany, Sept. 24, 2014—The “3D fast forward – 3D in reality” section of INTERGEO focuses on the use of 3D city models. Where are we at when it comes to 3D city models? And where are we headed? Talking to event host and speaker from the Special Interest Group 3D Dr. Egbert Casper more than whets the appetite for the event on Wednesday, 8 October.

On the topic of 3D city models, Dr. Egbert Casper, Head of the Special Interest Group 3D (SIG 3D), takes a deep breath and begins by explaining that, at the start of the 2000s, the hype curve started out with great expectations due to the explosion of technical possibilities at the time. “Back then, everybody thought that 3D city models would solve all our problems,” says Dr. Casper, “but that wasn’t the case”. Even for their enthusiastic advocates, 3D city models have not turned out to be the holy grail, yet now more than ever they have earned their rightful place.

“Right now, we are at the midway point on the hype curve and are on the ‘path to enlightenment’, having already traversed the ‘valley of disappointment’,” says Casper. He believes people have become more realistic when it comes to 3D city models and extensive models are no longer being developed on impulse or just for the sake of it. Instead, detailed questions are now being asked about the applications that are to be used and what issues are to be addressed before any work is undertaken.

Not a killer application, just a whole host of uses

Naturally, nowadays there is a whole host of applications for 3D city models, yet everybody is still looking for the one all-legitimising killer application. Digital reproductions of cities have gained ground when it comes to urban planning and development, and are also used for disaster management simulations, e.g. floods or incidents involving chemicals. Cities use their 3D models to market properties or commercial real estate or even to present the most realistic or attractive view of themselves online. Application scenarios relating to the energy revolution are relatively new.

Casper does not want to commit to using the term “killer application” here, but he does see great potential: “The energy revolution is a highly exciting area for 3D city models as they can be used to tackle countless detailed problems.” According to Casper, these areas include strategic energy development for city neighbourhoods. If, for instance, generational change is anticipated in a certain neighbourhood, targeted planning to renovate the buildings’ energy infrastructure can be undertaken.

There is also potential when it comes to realising city-wide energy-saving measures. At present, a scatter-gun approach is often adopted here, the result being that some neighbourhoods are littered with solar units while the roofs in other neighbourhoods still lie completely bare. 3D city models make it easier to determine where remedial action makes the most sense. Not only that, they can even be used to identify where power lines, wind turbines or biogas plants could be erected and indeed where they could not. The growing calls for citizen participation are a key point in this regard.

Casper believes 3D city models are valuable whenever decision-makers or citizens have to be informed of urban changes, e.g. when it comes to questions relating to energy. For specialists, 3D representations are at best an adjunct, but they are a fundamental support for the layperson when it comes to geodata.

A lot has been done

Why is it that the euphoric sense of excitement surrounding all things 3D that prevailed at the start of the century has given way to today’s realistic approach? “A lot has been done,” stresses Casper.

Many cities have developed 3D city models and are also making use of them. Nowadays, city models are available across the whole of Germany at LOD (level of detail) 1. For the uninitiated, LOD 1 means models made of blocks – similar to Lego bricks – that depict the built landscape of cities. These block models are just right for some applications, e.g. analysis of noise pollution, as required by the EU, or fine particle analyses. When it’s necessary to capture more detail on the volume of buildings from an energy perspective, LOD 1 no longer fits the bill. For instance, to determine if certain roofs are suitable for the installation of solar units, the roof shape has to be considered at the very least and this would require a block model showing roof shape or LOD 2.

According to 3D expert Casper, these are still not available in all of the German federal states. If a city is looking to use a model for planning or location marketing purposes, a model with façades is needed and this brings us to what is known as LOD 3. However, such models are generally only available if cities or municipalities have constructed these themselves or commissioned their development. Furthermore, variance between the requirements of regional administrations and local authorities leads to different models – in the regional administration’s city model of Cologne, the cathedral is barely discernible, yet the model developed by the City of Cologne shows the cathedral in all its glory from every viewpoint.

Casper believes fragmented data presents a significant barrier to the use and acceptance of digital city reproductions. If local authority areas or regional administration boundaries are crossed, it is highly likely that there will be a mismatch between the data and it will have to be adapted. This naturally involves cost and, in turn, makes users increasingly reticent.

It’s now more than ten years since the emergence of SID 3D which helped achieve a breakthrough in city models. CityGML was developed from among its ranks and has since established itself as the standard upon which 3D city models are based. The group is looking to set guidelines to safeguard the quality of 3D data. It also advocates adding the third dimension to the ALKIS real estate register and, last but not least, is strongly committed to applications for 3D city models. These do not exist simply for the sake of it but are instead a means of providing answers to problems and to develop specific solutions.

As he finishes talking, Egbert Casper takes another deep breath…

To find out more about 3D city models: The “3D fast forward – 3D in reality” session hosted by Dr. Egbert Casper takes place at INTERGEO on Wednesday, 8 October, from 3.30 to 5.30 p.m. Following ten short presentations featuring practical examples, the subsequent panel discussion is sure to be a lively affair.

INTERGEO is the world’s leading trade fair for geodesy, geoinformation and land management. A total of 16,383 visitors from 90 countries came to the previous communication platform to find out about the innovations in the industry from 516 companies from 30 countries. More at http://www.intergeo.de