Illinois Governor Marks the Milestone for High-Speed Rail Between Chicago and St. Louis 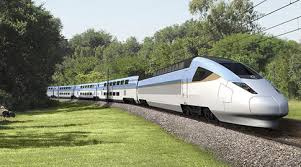 Governor Pat Quinn today marked a significant milestone in the construction of major high-speed rail track work between Chicago and St. Louis. The Governor was joined by Union Pacific Railroad officials as the last segment of track and ties were replaced. Today’s event is part of Governor Quinn’s agenda to bring high-quality rail service to all areas of Illinois.

“High-speed rail service will create jobs and open new economic development opportunities across Illinois,” Governor Quinn said. “The work done today will help residents get to their destinations quickly and efficiently for years to come. I am proud that our state is leading the way on this transportation trend of the future.”

The Governor and Union Pacific officials watched the Track Renewal Train (TRT) as it concluded major track and tie replacement work that began four years ago. The TRT caravan is the mile-long set of equipment and workers that replaces old rail and wooden ties with new high-speed track and concrete ties.

The Chicago to St. Louis high-speed rail project is on schedule to reduce the 5-1/2 hour trip between the two cities by 30 minutes at the end of 2015 and another 30 minutes by the end of 2017. By the end of 2015, more than two-thirds of the corridor will be capable of hosting trains running at 110 mph, compared to just 15 miles today between Dwight and Pontiac.

Governor Quinn’s Illinois Jobs Now! capital construction program is contributing nearly $400 million toward the Chicago to St. Louis high-speed rail project as a match to the $1.3 billion the state has received from the federal government.

In addition to the track and tie work, crews are continuing to improve the nearly 300 grade crossings along the corridor, adding four-quadrant gates at all public and private crossings, and dual gates at farm and pedestrian crossings.

Later this year and in 2015, installation will begin of the positive train control signaling system, the federally-mandated operating system designed to maximize safety along the corridor. Union Pacific is building or extending 13 new sidings that have been designed to provide passing tracks that will permit passenger and freight train traffic to flow smoothly and make the Chicago-St. Louis service more reliable.

“Working together with the Illinois Department of Transportation and the Federal Railroad Administration, we have made great strides on this important public – private partnership,” said Donna Kush, Union Pacific vice president – Public Affairs, Northern Region. “Our engineering team has produced some very impressive numbers since this project started in 2010 by installing about 500 miles of rail and nearly 650,000 concrete ties, while spreading more than 1.3 million tons of ballast to help provide a safe and stable roadbed.”

The corridor will receive all new railcars and locomotives over time, beginning with initial deliveries in summer 2016. Railcars are being made by Nippon-Sharyo in Rochelle, which just added another manufacturing shop this summer, and locomotives by Siemens in Sacramento.