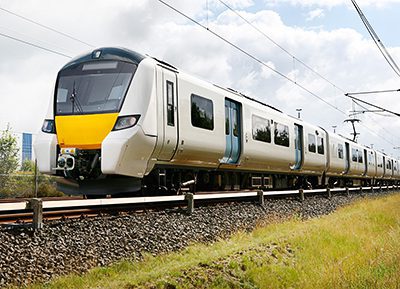 The British Secretary of State for Transport, Patrick McLoughlin, and Jochen Eickholt, CEO Siemens Rail Systems, alongside Cross London Trains and Govia Thameslink Railway Limited, today presented for the first time three completely assembled cars for the new Class 700 train, to be used as part of the Thameslink project, at Innotrans 2014.

Patrick McLoughlin, Secretary of State for Transport, said: “A world-class rail network needs world-class trains, and it is fantastic to see the spacious and energy-efficient new carriages that passengers will soon be able to use. As part of our long-term economic plan, we are investing record amounts in transforming the rail network, providing more seats, better connections and improved journeys. The Thameslink Programme is central to this. These trains will provide real benefits to passengers when they come into operation.”

Jochen Eickholt, CEO Siemens Rail Systems Division, said: “Our project teams in Great Britain and in Germany have put their hearts and souls into developing the second platform generation for Great Britain. They have improved our Desiro product from the standpoint of engineering and production. The Thameslink trains will also benefit in particular from the competence gained in years of maintaining Desiro fleets in Great Britain and around the world. These trains are “designed to maintain”. This will ensure that they will transport commuters in Greater London punctually, reliably and comfortably.”

The new electric Class 700 train will offer a much improved travel comfort for passengers and alongside the wider infrastructure work will boost capacity and reliability across one of Europe’s busiest stretches of railway. The Class 700 trains are approximately 25% lighter than previous generations, and are up to 50% more energy efficient.

The first Class 700 will run on the Bedford to Brighton line in early 2016. By the end of 2018, the Class 700s will run with high frequency through central London every two-three minutes at the busiest times. This equates to 24 trains per hour in each direction through the central core.

Andy Pitt, Executive Chairman, Cross London Trains, said: “Cross London Trains is delighted to have financed these Class 700 trains and it is fantastic to see the state-of-the-art train showcased at such an industry leading event”.

Charles Horton, Chief Executive Officer of Govia Thameslink Railway Limited (GTR), which operates Thameslink and Great Northern services, said: “The Class 700 will completely transform the travelling experience of our passengers, unlocking the potential of the Thameslink Programme to increase capacity and address the heavy crowding many experience on a daily basis. Acting as delivery agent for the Government, we will introduce this new fleet, with trains arriving first on Thameslink in 2016 and then on Great Northern a year later. When the two routes join in 2018 there will be fabulous new connections across the south east.”

The Siemens Rail Systems Division (Berlin, Germany) is an international leader in providing rolling stock and related services. Its portfolio covers the full range of vehicles – from railroad cars to metros and locomotives to trams and light-rail vehicles. The Division combines competence in the areas of local, long-distance, and logistical transport to offer comprehensive expertise for environmentally friendly, efficient, and reliable rail vehicles, which are already in use in more than 40 countries. For more information, visit www.siemens.com/rail-systems

Cross London Trains is a consortium comprising Siemens Project Ventures GmbH, Innisfree Limited and 3i Infrastructure plc. XLT is procuring and financing the new train fleet and leasing it to the operator of the Thameslink franchise.

Govia Thameslink Railway (GTR) began running Thameslink (Bedford to Brighton, Sutton and Wimbledon) and Great Northern (London to Peterborough, Cambridge and King’s Lynn) rail services on Sunday 14 September. A small number of services and stations currently operated by Southeastern will transfer to GTR in December 2014 and in July 2015 the Southern and Gatwick Express routes will be incorporated into the franchise. GTR will then be the largest rail franchise in the UK in terms of passenger numbers, trains, revenue and staff: GTR will carry about 273 million passenger journeys per year, employ around 6,500 people and generate annual passenger revenues of approximately £1.3bn. www.gtrailway.com