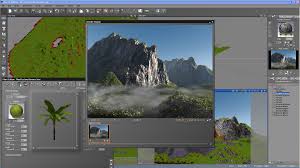 The 2014.6 PLE and Trial Versions allow users to learn and master all the new features from the recent PlantFactory 2014.6 release.

The Personal Learning Edition of PlantFactory Producer is a fully functional version that lets users save their work and never expires. It is designed for Artists and Students that want to master the best plant solution on the market, without punching a hole in their wallet.

With the PLE, users can:

Users can download the PlantFactory PLE at no charge from try.plantfactory-tech.com

The PlantFactory Trial lets users test the same capabilities found in all different versions of PlantFactory (Studio, Designer, and Artist) so they can decide which one best fits their needs. The Trial contains all 3 versions.

Users can download the PlantFactory Trial Versions at no charge from try.plantfactory-tech.com

The PlantFactory Trial Version is fully functional, aside from the following limitations: saving is disabled, renders carry a logo, render stills up to 1920×1080 and animations up to 1280×720, 1 polygon out of 5 is removed from exported geometry (export feature available in Studio and Designer only), and the trial version ships with a limited content selection. Once registered, the Trial Version will work for 30 days.

VUE Infinite 2014.6 and VUE xStream 2014.6 are the latest production-driven versions of e-on software’s professional solutions for the creation, animation and rendering of natural 3D environments.

Learn more about the technologies in VUE 2014 at www.e-onsoftware.com/xstream/?page=new

Create complete projects, save their work and export to other applications,
Render in FullHD (for stills) and animations up to 720p,
Experience VUE’s power directly inside 3ds Max/Maya/Softimage/LightWave/Cinema4D,
Try VUE RenderNodes on their network,
Learn at their own pace (the PLE never expires)!

Users can download the VUE 2014 PLE at no charge from www.vue3d.com/ple.

The Personal Learning Edition ships with a selection of VUE presets, as well as the full PDF Reference manual. More presets are available in the commercial version. Scene files created and saved with the PLE cannot be exchanged with other PLE users and are not compatible with other versions of VUE except ATC Licenses. The PLE is for personal, non-commercial use only, and renders may be watermarked and carry a logo.