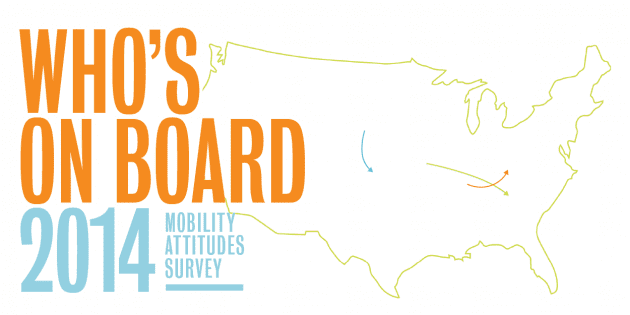 A first-of-its-kind study about attitudes toward transit use in the U.S. was released today by TransitCenter, a philanthropy committed to improving transit through innovation. The study – Who’s on Board: The 2014 Mobility Attitudes Survey – reveals that Americans from regions coast to coast think about and use public transit in remarkably similar ways.  The report is the first to compare rider and non-rider attitudes by age, income, education, family status and ethnicity, and to examine both cities and suburban areas across various regions of the U.S.

“We commissioned this survey to take a deeper look at the public attitudes which are propelling recent increases in transit ridership,” said Rosemary Scanlon, Chair of TransitCenter and Divisional Dean of New York University’s Schack Institute of Real Estate. “As Millennials begin to take center stage in American life and the Baby Boom generation confronts retirement, both the transit industry and the real estate industry will need to adjust. Who’s On Board offers significant insights for professionals in both fields.”

The survey, the largest of its kind, sampled nearly 12,000 people from a selection of 46 metro areas across the country, including a mix of “transit progressive” cities (such as Miami, Denver, Seattle, and Minneapolis) and “transit deficient” cities (such as Tampa, Dallas, Fresno, and Detroit) revealing several surprising trends about today’s public transit commuters:

“These findings provide concrete evidence of what many of us in the transit field have long suspected: there is a desire for reliable, quality transportation in communities across all regions of the U.S., and among riders of all ages, backgrounds and financial status,” said David Bragdon, Executive Director of TransitCenter. “Unfortunately, this desire is largely going unmet, to the detriment of many local economies. To serve – and attract – residents and workforces today and in the future, cities need to unite land use and transit planning to form comprehensive, innovative infrastructures that can support this demand.”

“Denser, mixed-use places are what most Americans want today, and will demand tomorrow,” said Christopher Leinberger, Chair of George Washington University’s Center for Real Estate and Urban Analysis and president of LOCUS, a national network of real estate developers who support sustainable growth. “High-quality transit can serve as a backbone for exactly this kind of development. While cities and suburbs that marry transit and mixed-use development reap the rewards, those that stick with a conventional suburban approach may find themselves stagnating.”

The report is based on a survey administered online to 11,842 respondents, in 46 Metropolitan Statistical Areas (MSA’s) who were selected and invited to participate based on age and geography (by home ZIP code). The survey will be updated and conducted regularly to track changes in transit rider attitudes and regional trends over time.