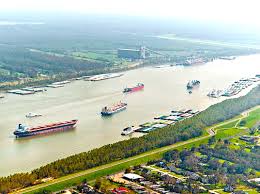 “As MRCTI members, we have been able to collectively bring national attention back to America’s most important river.  Our livelihoods, health, and futures are all linked to the Mississippi River; and I am proud to host these Mayors as we protect and promote our precious waterway,” explained New Orleans Mayor Mitch Landrieu.

With an initial $15,000 contribution from American Water, the Fund will provide grants to support start-up costs associated with sustainable waterfront development and will provide valuable seed-money for city sustainable waterfront development projects. Cities from Minnesota to Louisiana have developed remarkable plans for riverfront parks, ecosystem restoration, the establishment of green tourism destinations, repair of critical water infrastructure, or expansion of economic engines such as ports and terminals. Typically, the most difficult funding to secure are start-up costs, so this fund will help ensure that projects like these get off the ground.

In announcing the Fund, MRCTI Co-Chair Roy Buol, Mayor of Dubuque, IA said: “Every dollar invested in water infrastructure yields two dollars in economic development. Infrastructure is the physical platform of our economy; and we mayors want to do what we can to sustain that platform. This fund gives us another way.”

Also, during the conference, MRCTI Mayor co-chairs, Dominik Knoll, chair, World Trade Center Mississippi River Alliance—consisting of seven World Trade Centers, and Don Hickman, chairman, Mississippi River Partnership of Community Foundations—representing 18 community foundations, signed an agreement to work together toward sustainable River projects. The partnership will build investments around river-centric projects at the local level. Now, community foundations can partner with their world trade center for assistance in completing any number of initiatives that are linked to the Mississippi.

“The partnership will encourage big and imaginative efforts that will improve our River communities. Anything from youth enrichment programs that engage students in the importance of the River’s ecology and economy to restoration projects that reclaim natural landscapes from previous, less sustainable uses are on the table,” explained MRCTI Co-Chair AC Wharton, Mayor of Memphis.

Organized by the Northeast-Midwest Institute and funded by the Walton Foundation, MRCTI is an effort to bring national attention back to the Mississippi River—America’s most critical natural asset—and spearhead a new level of regional cooperation to make it more sustainable.  As the ecological linchpin to the 37-state Mississippi River Basin, the River is responsible for creating $200 billion worth of U.S. GDP; providing drinking water for more than 18 million; transporting 62 percent of our nation’s agricultural output; delivering nearly 400 tons of coal and petroleum products; and directly supporting one million jobs and millions more indirectly.