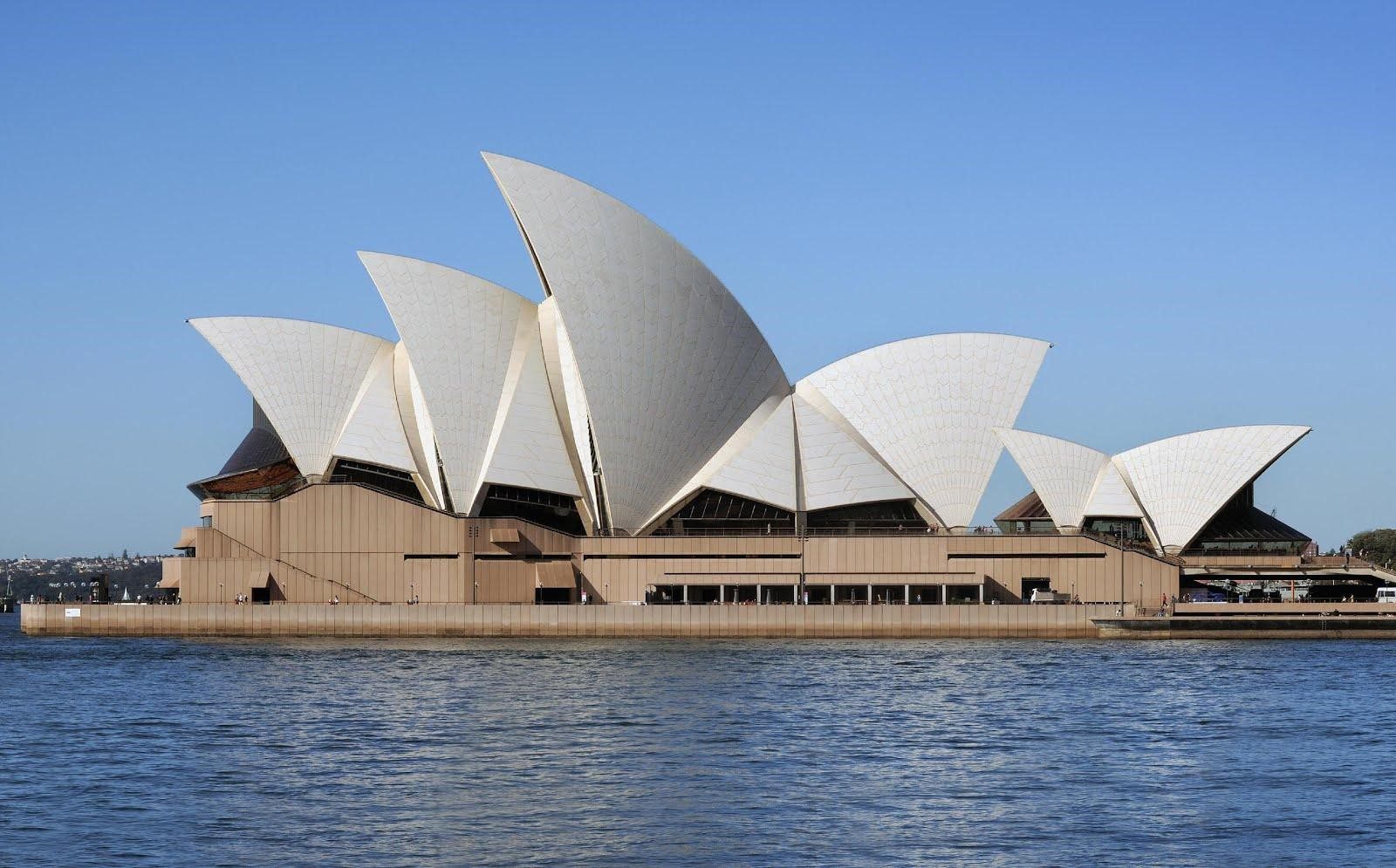 The Getty Foundation in Los Angeles today announced the first ten grants for significant modern buildings as part of a major new philanthropic initiative focused on the conservation of 20th Century architecture around the world. Called Keeping It Modern, the effort will address the considerable challenges involved with the conservation of modern architectural heritage through support for key model projects.

“Keeping It Modern builds on the Getty Foundation’s long and successful track record of support for the conservation of historic buildings around the world,” said Deborah Marrow, director of the Getty Foundation. “This new initiative, Keeping It Modern, continues our commitment, but now brings into sharp focus the specific conservation issues of modern buildings. This initial round of grants includes important buildings on several continents.”

Modern architecture is one of the defining artistic expressions of the 20th Century, and is increasingly at risk. Architects and engineers often used experimental materials and novel construction techniques to create innovative forms and advance new approaches to architecture. These cutting-edge building materials and structural systems were often untested and have not always performed well over time. Heritage professionals do not always have enough data on the nature and behavior of these materials to develop the necessary protocols for conservation treatment. Keeping It Modern is addressing these challenges by funding model projects that can point the way toward new methods and standards for the conservation of modern architecture.

Each grant project has been chosen for its architectural significance and potential to advance conservation practices related to modern architecture. Grants focus on the comprehensive planning, testing, and analysis of modern materials, as well as the creation of conservation management plans that guide long-term maintenance and conservation policies. Together, the projects represent a variety of challenges professionals face in preserving modern buildings, from the aging of materials such as concrete to scientific analyses of exterior and interior finishes.

The Foundation created Keeping It Modern to complement the Getty Conservation Institute’s Conserving Modern Architecture Initiative (CMAI). Two of the first ten projects funded through Keeping It Modern (the Salk Institute and the Eames House) are related to CMAI projects.

Keeping It Modern is part of the Getty’s strong overall commitment to modern architecture, as demonstrated by CMAI, as well as the extensive and growing architectural collections of the Getty Research Institute, and the recent Pacific Standard Time Presents: Modern Architecture initiative which focused on Los Angeles’ modern heritage. With these combined efforts, the Getty hopes to significantly advance the understanding and preservation of 20th Century modern architecture.

Future Keeping It Modern grants will be awarded through a juried competition process. Support will be available for significant buildings around the world from the modern era that serve a public function and are owned by nonprofit, charitable, or public entities that are committed to the building’s long-term preservation and maintenance. Deadlines and criteria for the next round of applications will be announced on the Getty Foundation website at www.getty.edu/foundation.

The Getty Foundation fulfills the philanthropic mission of the Getty Trust by supporting individuals and institutions committed to advancing the greater understanding and preservation of the visual arts in Los Angeles and throughout the world. Through strategic grant initiatives, the Foundation strengthens art history as a global discipline, promotes the interdisciplinary practice of conservation, increases access to museum and archival collections, and develops current and future leaders in the visual arts. It carries out its work in collaboration with the other Getty Programs to ensure that they individually and collectively achieve maximum effect. Additional information is available at www.getty.edu/foundation. 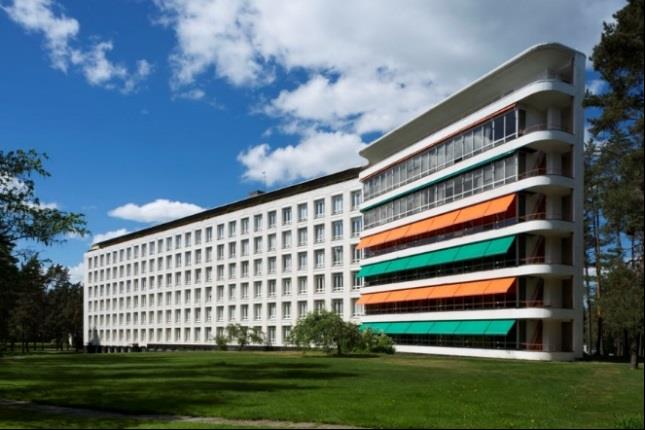 Located in a pine forest in southwest Finland, Paimio Sanatorium (1930-33) is a national monument and a classic example of Alvar Aalto’s early modern functionalist style. Aalto designed the sleek, concrete building as a ‘medical instrument’ that would contribute to the healing of tuberculosis, paying close attention to hygiene and patient comfort. The building was repurposed as a general hospital in 1971 but has since closed as a health care facility. Finding a suitable new use for the building is a necessity, but difficult given the Sanatorium’s scale, remote location, and protected heritage status. A Getty grant will support development of a conservation management plan to address these challenges and prepare long-term conservation policies for the Sanatorium to ensure that its historic features remain preserved in any adaptive reuse.Grant support: $180,000 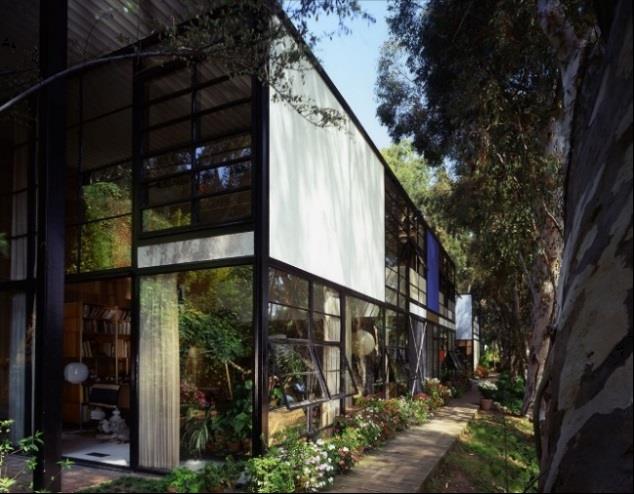 Built by husband and wife designers Charles and Ray Eames, the Eames House in Pacific Palisades, California epitomizes the couple’s embrace of livable modernism with its brightly painted outdoor surfaces and intricately appointed indoor spaces. The Eameses carefully considered every detail of the site while living there (1949–1988) and modified it over the years, making the house a fascinating case study of their evolving aesthetic values and taste. The Getty grant will allow a team of conservation specialists to complete thorough research on the house’s many layers of interior and exterior colors and finishes using advanced analytical techniques. The results of the study will inform both future conservation of the building and a conservation management plan currently being prepared by the Getty Conservation Institute.Grant support: $100,000 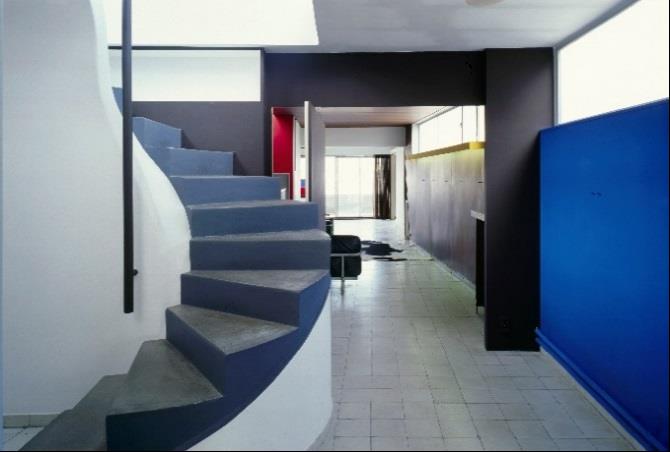 Le Corbusier designed the Molitor apartment building in Paris the early 1930s in collaboration with his cousin Pierre Jeanneret. He occupied the top two floors as his living space and studio until his death in 1965. Both floors show Le Corbusier’s signature style of carefully planned spaces and proportions, simple but elegant materials and forms, ample natural light, and a white interior scheme balanced with wall-sections painted in primary colors. Expanding on a recent archival study documenting changes to the apartment over the years, conservation experts will examine the physical fabric and condition of the residence, correlating these results with the archival record to develop a comprehensive plan for the apartment’s restoration. The rigorous methodology of the conservation plan can serve as an example for other Le Corbusier buildings worldwide.Grant support: €147,000 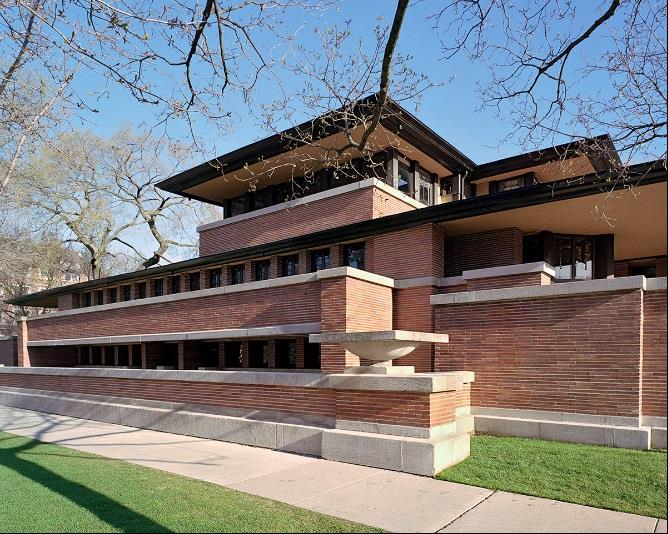 Designed and built between 1908 and 1910, the Robie House is one of the best known examples of Frank Lloyd Wright’s Prairie Style. With projecting cantilevered roof eaves and continuous bands of art-glass windows, the house won international acclaim as a turning point in modern domestic architecture and was designated a National Historic Landmark in 1963. The Frank Lloyd Wright Preservation Trust is now overseeing a full conservation of the building. Getty funds will allow it to simultaneously develop a long-term conservation management plan, a first for a Frank Lloyd Wright property.Grant support: $50,000 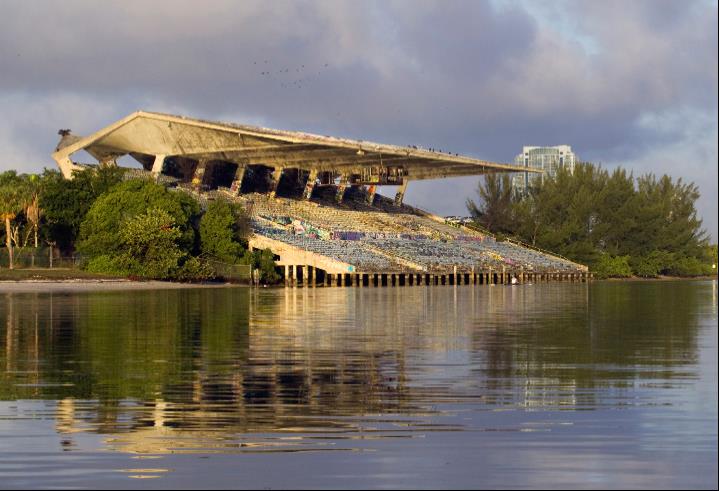 Stadium, view from the water. Photography by Ken Hayden

Designed in 1962 by Cuban-American architect Hilario Candela, Marine Miami Stadium is one of the city’s most iconic buildings and a showcase for the innovative use of poured concrete with its sculptural, origami-like roof. The nation’s first purpose-built speedboat racing grandstand, it was the premier venue for boat racing, as well as for concerts, religious services, and political rallies, from its opening in 1963 until its closure in 1992 after the devastation of Hurricane Andrew. As a result of many years of disuse, the building faces two interrelated conservation challenges: the structural integrity of and surface damages to the concrete, as well as extensive graffiti. Interestingly, some of the painting has been created by well-known graffiti artists and is now much appreciated, particularly by younger audiences. To address these intertwined issues, Friends of Miami Marine Stadium will use Getty support to complete scientific research and testing that addresses both the concrete and the graffiti leading to a comprehensive conservation strategy. Grant support: $180,000 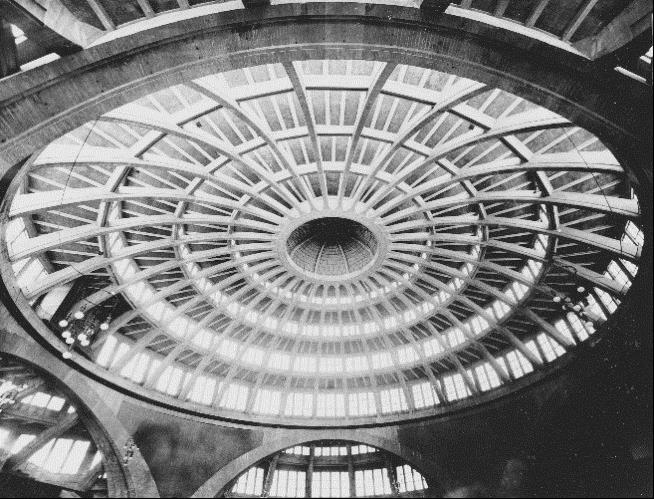 A tour de force of structural engineering, Centennial Hall in Wrocław, Poland was designed by German architect Max Berg in 1911 to celebrate the 100th anniversary of Napoleon’s defeat at the Battle of Leipzig. When Centennial Hall was completed in 1913, it was the largest reinforced concrete structure in the world and featured the biggest freestanding dome ever built. Widely recognized as one of the most important examples of early 20th century architecture, this UNESCO World Heritage site remains a popular venue for major conferences and cultural events. A Getty Foundation grant will allow the city of Wrocław to develop a conservation management plan to ensure the building’s long-term care and future conservation. The project includes archival research, detailed studies of interior surfaces and finishes, and extensive testing of the concrete’s condition and structural steel support, as well as 3D scanning and computer modelling to assess the building’s structural performance.Grant support: $200,000 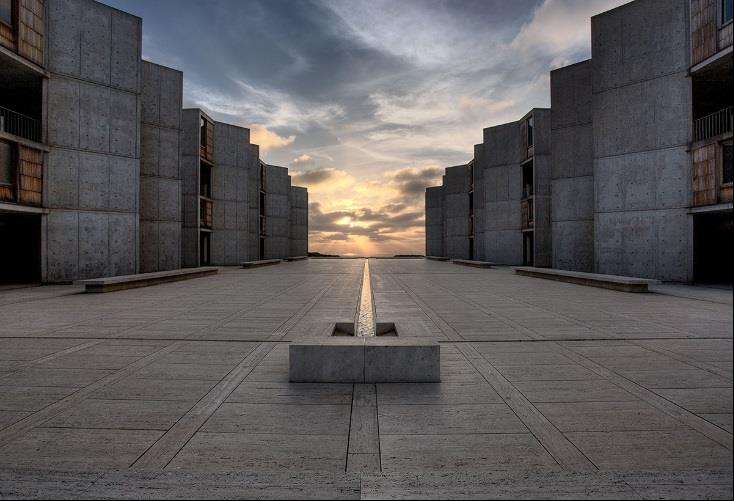 The Salk Institute for Biological Studies in La Jolla, California was established in the 1960s by Dr. Jonas Salk as a world-class scientific institute in which biologists and others could work together in an environment conducive to collaborative research. Salk chose renowned architect Louis Kahn for the project, and the two men formed a close friendship. They worked to build an institute that would bring a community of scientists together while at the same time offering a place for individual contemplation on a serene and isolated coastal bluff. One of the architecture’s most unique characteristics is its texturally-rich palette of modern materials: pozzolanic concrete, unfinished teak, lead, glass, Cor-Ten steel left to weather and rust, and stainless steel/nickel alloy framing the laboratory window walls. The Salk Institute will use Getty funds to create a comprehensive conservation management plan to preserve the buildings’ defining features. The grant complements a current project of the Getty Conservation Institute in partnership with the Salk Institute to address the aging and long-term care of the buildings’ teak wall assemblies. Grant support: $200,000 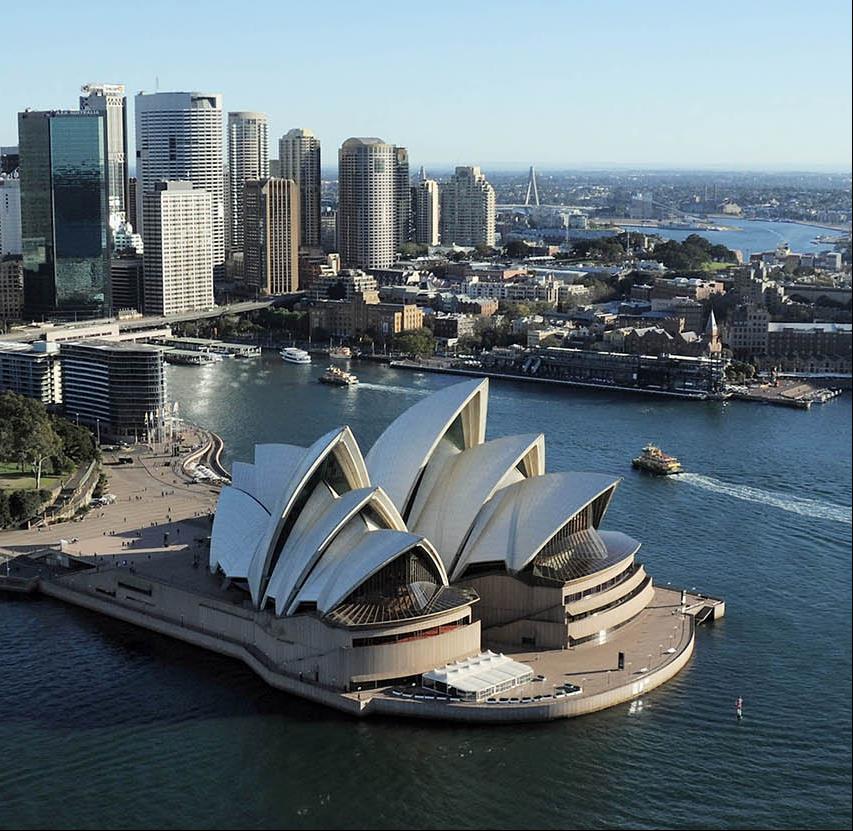 Designed by Danish architect Jørn Utzon and built from 1959–1973, the Sydney Opera House is a World Heritage site and a transcendent cultural symbol of Australia’s most populous city. With its famous, nested sculptural forms, the building is known for its innovative use of exposed steel reinforced concrete. Despite successful conservation efforts over the years, there is still insufficient knowledge about the condition of the concrete. The Getty Foundation grant will allow the Opera House Trust to complete a comprehensive study of the concrete elements and develop effective, long-term conservation protocols. The results will be integrated in Sydney Opera House’s conservation management plan, and will be easily accessible to building managers and maintenance staff, setting a new standard that will be shared with the field.Grant support: $200,000 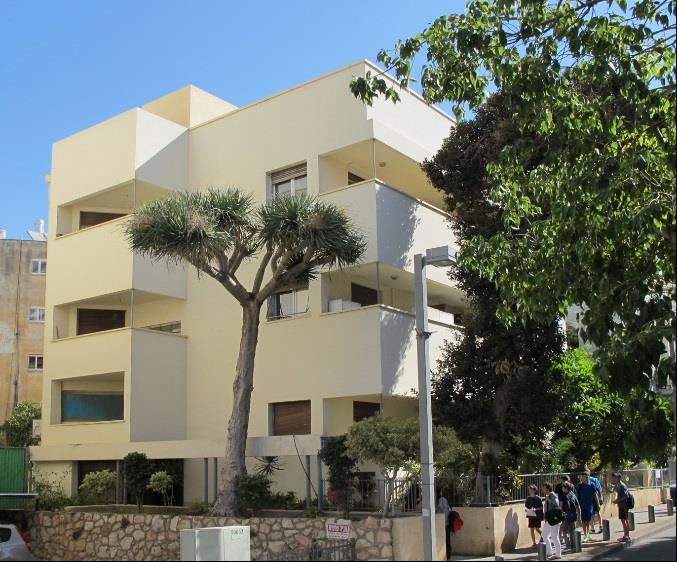 The White City of Tel Aviv is a UNESCO World Heritage site comprised of nearly 4,000 Bauhaus-style structures, the largest concentration of modern movement buildings in the world. The Max Liebling House (1936) sits in the heart of this historic zone, and its unique adaptation of Bauhaus principles and aesthetics to the Mediterranean climate was developed by Israeli architect Dov Karmi. The technical and stylistic innovations he introduced through buildings such as the Max Liebling House influenced an entire generation of postwar architects in the country. The Getty grant will support the development of a conservation master plan, including historic research and scientific testing and analysis. The building’s defining architectural features will be maintained while it will be adapted for use as a conservation heritage center for the White City.Grant support: $130,000 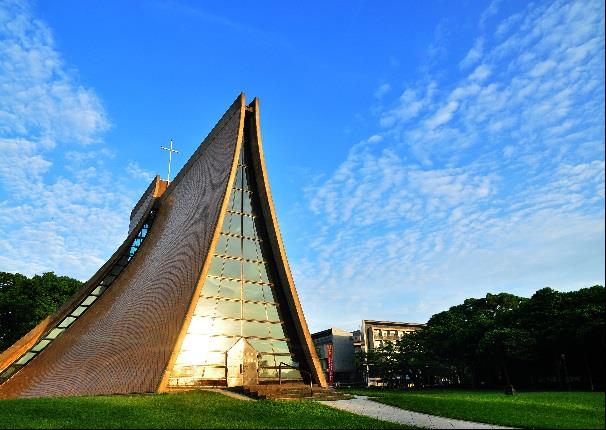 At the center of Tunghai University in Taiwan stands the Henry Luce Memorial Chapel. Designed in 1962 by Pritzker prize-winner I.M. Pei—a notable early work in his career—and completed by architect and artist C.K. Chen in 1963, the chapel is a powerful example of early modernism, but retains a nod to traditional Chinese temples with its sweeping roofline design. Originally intended to be built in wood, the chapel was constructed using innovative in situ cast concrete. A Getty grant will be used to create a comprehensive conservation plan for the chapel, the first ever for a modern movement building in Taiwan. The project will include in-depth research into the history of the building’s construction, materials, and past conservation efforts, as well as analysis and testing to provide much needed-weather proofing and climate control in the region’s typhoon-prone environment.Grant support: $175,000