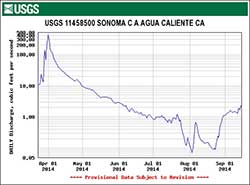 While the national streamflow database is documenting evidence of California’s historic drought, the database is also confirming another recently seen hydrologic phenomenon: earthquake-induced increases in streamflow.

Rivers and streams across California are flowing at record lows. Streamflow data from 182 U.S. Geological Survey streamgages in California with at least 30 years of record, currently show that 62 percent of streamgages are recording flows less 25 percent of normal, and 44 percent are recording flows less than 10 percent of normal. At several streamgage sites, scientists have had to extend measurement scales and rating formulas that help calculate accurate streamflow, because of record low water flows.

Meanwhile, in the aftermath of the August 24 magnitude 6.0 South Napa Earthquake in California, water has begun to flow again in some previously-dry surrounding creeks, rivers and streams prompting many nearby residents to scratch their heads.

Hydrogeologic responses to earthquakes have been known by scientists for decades. In the case of the South Napa Earthquake, the discharge of springs and groundwater to some streams has increased. Based on experience in previous earthquakes, stream and spring flows are expected to decline again over the next several months, assuming that the Napa region does not get significant rainfall over that time period.

Post-earthquake changes in streamflow were recorded at a USGS streamgage on Sonoma Creek, near the city of Sonoma where measured increases in streamflow began after 4:15 a.m. on August 24, about an hour after the earthquake occurred. Streamflow has increased intermittently since the earthquake from 0.1 cubic feet per second to nearly 3 cfs on September 12. The median historical streamflow for this time period is about 0.5 cfs. Scientists theorize that this increase in streamflow is due to groundwater flow entering the river, and the intermittent nature of the streamflow is due to the non-uniform release of groundwater across the basin.