City of Saskatoon Recognized for Increased Citizen Engagement through GIS 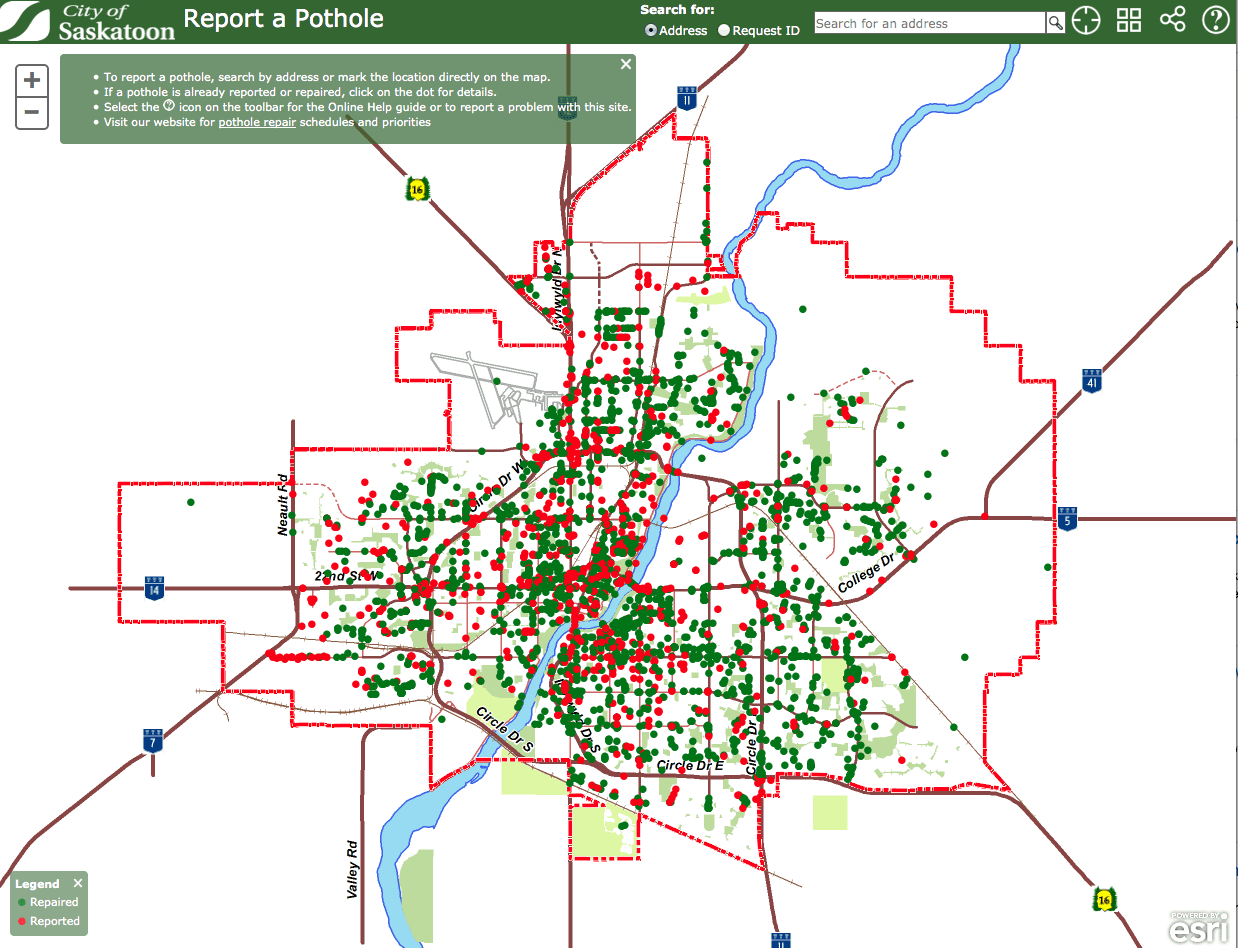 The City of Saskatoon received an Award of Excellence today from Esri Canada for developing a geographic information system (GIS) application that allows citizens to report potholes.  Built on Esri’s ArcGIS platform, the Web-based Report a Pothole application is a crowdsourcing tool that allows the public to easily report potholes on an interactive map from a computer, tablet or mobile device.  Since the launch of the application in March 2014, more than 3,800 potholes have been reported online and pothole-related calls to the City have been significantly reduced.

“We used to offer an online, text-based form for citizens to report a pothole but we wanted to improve the process and allow residents to pinpoint the exact location on a map from any type of device,” said Amin Ahmed, Acting Director of Information Technology, City of Saskatoon. “Feedback from citizens has been extremely positive.  They really appreciate the ability to report a location and check on the status of a request.  We are looking forward to the next version of this interactive map application, to include an internal mobile platform for our Public Works staff that will help with providing more timely information to residents.”

Every spring, the City of Saskatoon conducts a pothole blitz to repair the road degradation from the harsh freeze/thaw cycle that the community experiences every year.  While road maintenance crews routinely inspect road conditions and make repairs, the reporting back to the citizens on their request piece through the Report a Pothole application goes a long way in earning their trust.

“Leveraging our Canadian Municipal Data Model and the Citizen Service Request template, the City of Saskatoon was able to expedite the development of this application and save money at the same time,” said Alex Miller, president, Esri Canada. “The application allows citizens to pinpoint a spot on the map and fill out a simple pop-up form, and also have the option to add a picture.  This automation has increased the efficiency with which City crews locate and repair potholes, and has allowed them to prioritize areas and address the most serious issues first.”

With the successful launch of the Report a Pothole application, the City of Saskatoon has also recently deployed additional interactive Web-mapping applications: the Utility Cuts and Repair Schedules map showing schedules for road, concrete and landscape repairs; the Saskatoon Services and Schedules map providing collection and city services schedules and location information; the Road Restrictions and Construction Projects identifying work locations and type; and the Saskatoon Public Art Collection displaying  locations and information of the City’s outdoor art collection.

About City of Saskatoon
Saskatoon is Saskatchewan’s largest city with an estimated population of 254,000 and growing. This commercial centre and region has one of the most diversified economies – producing outstanding products and services that are in demand throughout the world.  Various grains, livestock, oil and gas, potash, uranium, gold, diamond, coal and their spin off industries fuel the economy.  Nearly two-thirds of the world’s recoverable potash reserves are located in the Saskatoon region. The 2010 KPMG Competitive Alternatives Study ranks Saskatoon second with the most competitive business environment at the lowest cost among cities in the Midwest United States and Western Canada with a population of 500,000 or less.  Learn more about the City of Saskatoon at saskatoon.ca, or on Twitter, Facebook and YouTube.

About Esri Canada
Founded in 1984, Esri Canada provides enterprise geographic information system (GIS) solutions that empower businesses, governments and educational institutions to make timely, informed and mission-critical decisions by leveraging the power of geography.  The company distributes the world’s leading GIS software from Esri, Schneider Electric, Cityworks – Azteca Systems, Inc. and other technology partners.  Headquartered in Toronto, the company serves over 10,000 customers from 16 regional offices across Canada.  Esri Canada has joined the elite rank of Canada’s Best Managed companies and has been named to the Branham300.  Information about the company can be found at esri.ca. Follow Esri Canada on Twitter, Facebook, YouTube and LinkedIn.