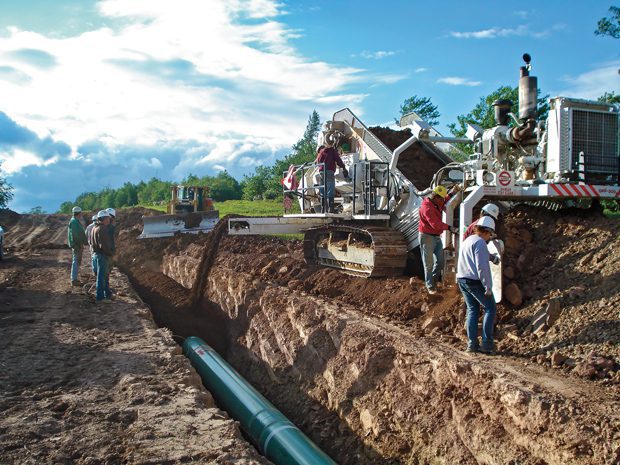 The linear mapping capability in Web AutoMapper facilitates the planning of any linear infrastructure development project – pipelines by energy companies, electric transmission lines by utilities, roads and highways by departments of transportation, and buried fiber networks by telecommunication companies.

“Web AutoMapper makes it faster and less expensive to map a proposed right-of-way or corridor project,” said LandWorks President Jerry Bramwell. “In minutes, project planners can download all of the digital parcel and land ownership information needed to select the safest and least costly route.”

To use the service, the client logs onto Web AutoMapper at www.LandWorks.com/automapper and creates an account. The user then uploads a shapefile of the proposed linear project route from their GIS or mapping software. Web AutoMapper prompts them to enter start and end points for the route. Customers are also given the option of having their route mapped with or without a buffer on either side.

Within minutes, Web AutoMapper overlays the route onto the nation-wide tax parcel grid developed by Digital Map Products of Irvine, Calif. Web AutoMapper then provides an onscreen map showing every property crossed by the route or within the user-selected buffer around the route. Paying with credit card or a customer account, the customer downloads the Digital Map Products parcels for only those properties affected by the proposed route. The parcel polygons are delivered in either shapefiles or as a file geodatabase for seamless ingest into the GIS or other mapping software.

Also included in the Web AutoMapper deliverable is a Line List Report identifying every property crossing in order from the starting to end points of the proposed route. Both the parcel polygons and Line List Report contain important attributes for each property, such as landowner and address details, obtained from county tax records.

“The linear mapping capability in Web AutoMapper serves as an easy-to-use cost-estimating tool for major infrastructure development projects,” said Bramwell. “The planner receives all of the land ownership information that will be needed to acquire rights-of-way for the project.”

In many cases, the ownership information in the parcel file will help planners identify certain types of properties – such as hospitals or schools – where rights-of-way may be impractical or simply too costly to acquire, said Bramwell. This allows the planners to look for less expensive alternatives while the project is still in its early phases.

Some linear projects require the developer to notify land owners within a certain distance of the proposed route. The buffering option in Web AutoMapper enables the planners to easily obtain land ownership information for properties within the regulated proximity to the line.

LandWorks introduced Web AutoMapper in 2013 as an inexpensive, fast and easy method of processing many types of standard property descriptions and converting them into digital map polygons. The cloud-based application is used extensively by organizations that must manage large tracts of land and keep property records up to date for activities related to oil & gas, renewable energy, mining, banking, utility, pipeline, state/local government, transportation, telecommunications, water and real estate sectors.