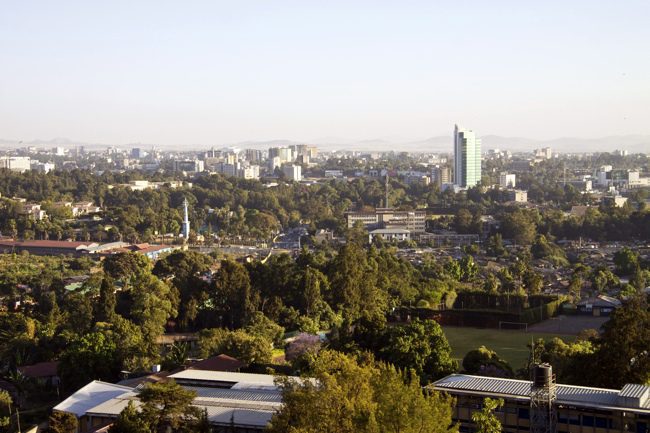 A member of the Bentley Developer Network, the Hansa Luftbild Group, Muenster, Germany, offers public- and private-sector clients expertise in the areas of geoinformation and geospatial problem-solving. The City of Addis Ababa, Ethiopia, retained Hansa Luftbild to develop a modern property registration and land information system to address rapid urban expansion, slum settlement, and land and property rights. A major part of the EUR 3 million project was to develop a service-oriented architecture (SOA) based on industry-standard components. Bentley Map was implemented at the client layer to maintain and administer the cadastre map data and descriptive information for 360,000 parcels and 1.15 million building or construction features in a 520-square-kilometer area. The software’s integration with .NET and open API saved nearly two man-months, or 20 percent, in development time.

In 1996, the Addis Ababa City Government implemented a cadastral project to register all property owners so that properties could be valued and taxed. A multi-purpose cadastre was established and data collected to support urban planning, land and property transfers, the issuing of building permits, and compensation payments. Eventually the combination of insufficient integration between the various land information systems and inefficient updating mechanisms led to a significant erosion of the cadastral map’s reliability.

Over time, rapid urban expansion in the capital city put pressure on land resources and contributed to the growth of slums, informal property settlement, land encroachment, and inadequately secured land records. In response to these challenges, the City initiated a new housing redevelopment program that required a reliable, consistent records-keeping system for real property rights and ownership. The Addis Ababa City Administration (AACA) committed to securing and clarifying land and property rights, and promoting the use of proper transaction processes through registration. An up-to-date cadastral map and robust geo-database system was critical to achieving these goals.

AACA retained Hansa Luftbild to develop a modern property registration and land information system based on efficient business processes. The contract included supporting the setup of a real property registration agency, drafting the necessary legal framework, and updating existing cadastral data. A major part of the project was the development and implementation of technical infrastructure to support cadastral processes. The system incorporated the principles of CADASTRE 2014 (International Federation of Surveyors) and implemented a data model derived from the ISO Land Administration Domain Model. Comprehensive CAD and GIS functionality provided the perfect base for handling cadastral data and ensuring data quality and consistency.

To meet the specific requirements of the local cadastre administration, Hansa Luftbild applied a SOA based on industrial standard components such as Bentley Map, Oracle Spatial, Microsoft ASP.NET and Windows Communication Foundation. Considering the limited telecommunication infrastructure available in parts of the city, the project team designed a distributed solution.
Hansa Luftbild implemented the system with a central cadastral database, decentralized sub-city databases, and client-level implementations. The installation in the sub-cities consisted of an independent proxy database for local operations, as well as the Bentley Map-based Real Estate Cadastre System (RECS) and the web-based Real Property Registration System (RPRS). The sub-cities were connected with the central installation via task-oriented middleware specifically developed to handle GIS data for the cadastre and property data for the real property register.

This architecture worked well with the level of telecommunication infrastructure currently available. The systems run using a less expensive network infrastructure and, if necessary, operate without permanent network connections between the head office and the sub-cities – all while ensuring service availability, and data consistency and correctness.

Hansa Luftbild decided to use Bentley Map as the foundation of the Addis Ababa Land Administration system due to the application’s outstanding features. Its persistent topology in combination with comprehensive CAD and GIS functionality provided the perfect base for handling cadastral data and ensuring the required data quality and consistency. The main challenge was to combine the comprehensive set of GIS and CAD features with a simple and efficient user interface that focused on the cadastral tasks.

The project team took full advantage of the wide variety of programming and configuration techniques provided by MicroStation and Bentley Map. The basic configuration was done with Geospatial Administrator. The resulting workspace contained all the necessary data connections, feature definition tools, and graphical user interface adjustments. Most of these functionalities were implemented with standard Microsoft .NET techniques, which maintained the look and feel of Microsoft applications.

Bentley Map was implemented at the client layer to maintain and administer the cadastre map data and its descriptive information. To update and complete the city’s data coverage, new digital aerial photography was acquired for the entire project area, covering 520 square kilometers and including all ten sub-cities. Photogrammetric data capture in a 3D-stereo environment was carried out on MicroStation. As a result, 360,000 parcels were generated and 1.15 million building or construction features were mapped.

The entire project was overseen by the Integrated Land Management Information System Project Coordination Office on behalf of the City Administration. The constructive working relationship between the oversight organization and the project’s working groups contributed to the project’s successful launch. Bentley Map ultimately supported the end user in fulfilling tasks in an efficient, effective, and reliable way. The high-quality data topology minimized the need to check for overlaps, gaps, and duplicate elements during post-processing.

In addition to the technical benefits of using Bentley Map, there were economic benefits to the end-user organization. Compared to other commercial off-the-shelf systems, the licensing costs per site were considerably lower with Bentley Map. Further savings were realized due to a direct connection with Oracle, which allowed out-of-the-box transactional read/write connections to Oracle Spatial without using costly middleware.

Bentley Map’s sophisticated .NET integration allowed Hansa Luftbild to use standard tools and frameworks for the development. This close integration simplified two regional customizations – support of the Amharic language and support of the Ethiopian calendar. The use of existing .NET components saved up to two man-months of development time.

With its combination of high-end GIS, CAD functionality, and usability, the Addis Ababa Land Administration System is now part of a state-of-the-art cadastre system. It covers the special needs of cadastre implementation in Addis Ababa as well as the general principles and requirements of a modern cadastre. This system could be used as a pilot solution with applications throughout Ethiopia and other African countries.

The Addis Ababa Land Administration System, developed by Hansa Luftbild, has several features that provide a strong advantage in less-developed countries. The three-tier-architecture accommodates the level of telecommunication infrastructure available. The system can run using less expensive network infrastructure and, if necessary, operate without permanent network connections between head office and departments. This ensures the availability of services, and the consistency and correctness of data. As a result, the cadastre system has the potential to improve the quality of life in developing countries throughout Africa.

Cathy Chatfield-Taylor is a freelance writer and principal of CC-T Unlimited, specializing in trend stories, case studies, and white papers about technology solutions for the AEC industry.