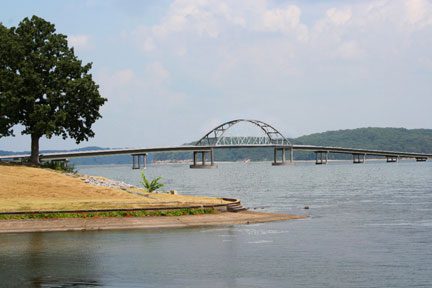 During a ceremony at scenic Kenlake State Resort Park, Gov. Beshear, surrounded by local officials, spoke of the great need for new bridges at Kentucky Lake and – coming soon – nearby Lake Barkley. The two bridges were among his highest transportation priorities.

“I keenly understand that the livelihoods of many people depend on the heavily traveled U.S. 68/KY 80 corridor. For this reason, it is immensely satisfying to see the shovel hit the dirt on this project after decades of conversation and planning,” said Gov. Beshear. “When complete, the distinctive design of these new bridges will serve as a signature gateway into the heart of the Land Between the Lakes National Recreation Area.”

The new four-lane bridge, which features a unique basket-handle tied arch design, will carry U.S. 68/KY 80 over Kentucky Lake and serve as the western entrance to Land Between the Lakes, which long has been one of Kentucky’s premier tourism destinations.

Crews have begun drilling pilings into the lake bed, and will soon begin to pour concrete footers for the new bridge piers. Contractors plan to pour pre-cast slabs at the site starting Thursday.

The new bridge will replace the venerable but narrow and obsolete Eggners Ferry Bridge, which was built in 1932 and long ago ceased to meet design standards for modern volumes and types of traffic, including recreational vehicles and modern freight carriers. The Eggners Ferry Bridge, joining Marshall and Trigg counties, has two lanes, each 10 feet wide, with no shoulders. The bridge required significant repair work after a barge struck it in January 2012, tearing away a 300-foot span. The bridge has since been repaired.

The new bridge will have four travel lanes, each 11 feet wide, plus 4-foot shoulders and a 10-foot-wide pedestrian/bicycle path.

It is part of a larger Lakes Bridges Project, which also includes replacement of the Henry Lawrence Memorial Bridge on Lake Barkley – a near twin of the Eggners Ferry. The Kentucky Transportation Cabinet is aiming to award a contract for the second bridge by December 2014.

An additional four-lane section to complete the new connect between Canton and Cadiz is in the right-of-way acquisition phase.

Like the Eggners Ferry, the Lawrence Memorial Bridge, also built in 1932, no longer can satisfy traffic demands in the region. Plans for the new bridge over Lake Barkley call for a design similar to that of the new Kentucky Lake bridge – four traffic lanes instead of two, with shoulders and a bicycle/pedestrian lane.

The recent award is the second for the Kentucky Lake project, which consisted of two construction contracts. The first, awarded in 2013 to Jim Smith Contracting, of Grand Rivers, was to construct the fill for the western and eastern causeways for the new bridge alignment. Part of the $25 million project also included a new bridge over a lagoon on the west side of Kentucky Lake, just north of existing U.S. 68/KY 80 and adjacent to the Kenlake State Resort Park campground. Work on this portion of the project is in final stages of construction.

Once completed, the Lakes Bridges Project will provide a continuous, four-lane route from Aurora to Cadiz, crossing both lakes and Land Between the Lakes. It also will be part of a four-lane corridor extending from Mayfield to Bowling Green.

“I am pleased to see work underway on the new Eggners Ferry Bridge,” said U.S. Rep. Ed Whitfield. “I will continue to work tirelessly to ensure that Kentucky’s share of federal gas tax dollars continue to be returned to our Commonwealth for improved transportation, bridges and roadways.”

“No other area of the state draws more tourists than Land Between the Lakes, so I’m convinced we will see those numbers grow even more once this bridge and the one over Lake Barkley are complete,” said Rep. John Tilley, who represents part of Trigg County. “Just as important, these bridges will also greatly expand our economic development opportunities while making travel much quicker and safer for those who live and work in the region. Today is the start of something special, and I’m glad I can be a part of it.”

“Today’s groundbreaking is a dream come true that has been decades in the making, so I cannot say enough good things about this project moving forward,” said Rep. Will Coursey, of Benton. “I was proud to work with Governor Beshear and my colleagues in the General Assembly to help provide the funding, and I’m looking forward to the day when we return to officially open this new bridge to traffic. This groundbreaking will be remembered as one of our region’s high points for years to come.”

“The project has been decades in the making. I recall when I represented the 5th District in the 1970’s, I traveled to Frankfort with officials from Calloway, Trigg, and Graves County, and the city of Murray to meet with the Governor and transportation officials urging them to build a new Eggners Ferry Bridge,” said Rep. Kenny Imes, of Murray. “Since that meeting in 1976, I have hoped for the day with the new Eggners Ferry Bridge project would finally come to fruition. Today is truly a dream come true for those of us who have worked for years to make it a reality.”

The Kentucky Transportation Cabinet awarded the contract for the new Kentucky Lake bridge to Johnson Brothers Corp., of Fort Worth, Texas, in February 2014. Michael Baker Jr. Inc. and Palmer Engineering designed the unique, basket-handle tied arch model – one of only a dozen in the world.

The new bridge is expected to be ready for traffic in December 2015 with completion in 2016. Additional information is at www.lakebridges.com.