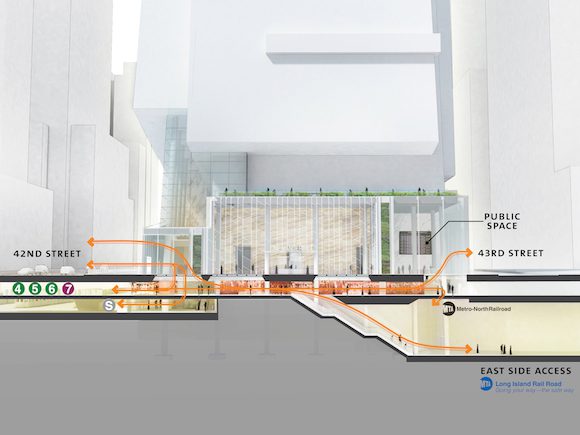 One Vanderbilt, the office tower being developed by SL Green and designed by Kohn Pederson Fox, will be New York City’s second tallest building once it rises a block west of Grand Central Terminal. And with it will come $200 million of transit infrastructure improvements, provided by the developer, that were a condition of the Midtown East Rezoning that allowed the tower height being approved.

Today, the specifics of those improvements were released. One Vanderbilt will include a new subway entrance on 42nd Street, a new corridor and escalators connecting trains (the 4, 5, 6, 7, Shuttle, and Metro-North) to the under-construction LIRR East Side Access concourse, a 4,000 square-foot, ground-level indoor transit hall, and a public plaza between 42nd and 43rd Street on Vanderbilt.