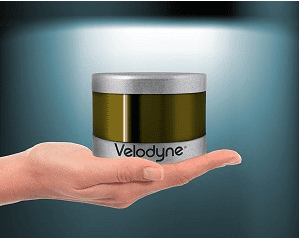 In a bid to dramatically expand the use of 3D LiDAR sensors in robotics, unmanned aerial vehicles and automation applications, Velodyne’s LiDAR Division today unveiled the Velodyne LiDAR Puck, dubbed the VLP-16.  The new 16-channel real-time LiDAR sensor is both substantially smaller and – with an introductory price of $7,999 — significantly less expensive than previous generation sensors.

Measuring 3D in real time, the VLP-16 is part of a growing family of solutions built around the company’s Light Detection and Ranging (LiDAR) technology and immediately establishes a new standard for affordability.  Being able to measure three dimensions in real-time at this price level represents a quantum leap for the technology and places Velodyne ahead of any other LiDAR solution provider, according to David Hall, Velodyne founder and CEO.

“Velodyne’s LiDAR Puck has the potential to be truly transformational, an enabling technology for a vast array of price-sensitive applications,” Hall said.  “The introductory pricing of $7,999 for this next-generation LiDAR sensor makes choosing the ‘Puck’ a total no brainer for any automation or robotics application requiring timely 3D vision.  There’s no longer any need to go through the hassle of combining several 2D sensors or mount one 2D sensor on a ‘nodding’ platform, now that one 3D sensor can do the job conveniently and at an even lower price point than multiple 2D sensors.”

The introduction of Velodyne’s LiDAR Puck is yet another major step in the evolution of LiDAR technology.  During DARPA Grand Challenges in 2004 and 2005, Velodyne’s HDL-64E high-resolution sensor revolutionized the world of environmental 3D perception and has since become the sensor for self-driving cars.  In 2010, the company introduced the smaller, lighter-weight model HDL-32E, which is now the de facto standard for major location providers as they map the globe.

The new VLP-16 sensor is smaller still, vastly more cost-effective and developed with mass production in mind.  At the same time, it retains the key features of Velodyne’s breakthroughs in LiDAR: “Real-time, 360°, 3D distance and calibrated reflectivity measurements.”

Preliminary specifications call for a range of more than 100 meters, with a target range of 150-200 meters.   The unit’s low power consumption (<10W), light weight (about 600 grams), compact footprint (Ø100mm x 65mm), and dual return option make it ideal for UAVs.  Velodyne’s LiDAR Puck supports 16 channels, ~300,000 points/sec, a 360° horizontal field of view and a 30° vertical field of view, with ±15° up and down.  The Velodyne LiDAR Puck does not have visible rotating parts, making it highly resilient in challenging environments.

Effective immediately, Velodyne is taking orders for its LiDAR Puck at the $7,999 introductory price.  The product is expected to ship by the end of the calendar year.  For ordering information, please email VLP16@velodyne.com and visit www.velodynelidar.com

Founded in 1983 and based in California’s Silicon Valley, Velodyne Acoustics, Inc. is a diversified technology company known worldwide for its high-performance audio equipment and real-time LiDAR sensors.  The company’s LiDAR division evolved after founder and inventor David Hall competed in the 2004-05 DARPA Grand Challenge using stereovision technology.  Based on his experience during this challenge, Hall recognized the limitations of stereovision and developed the HDL64 high-resolution LiDAR sensor.  More recently, Velodyne has released its smaller, lightweight HDL‑32E sensor, available for many applications including UAVs.  Since 2007, Velodyne’s LiDAR division has emerged as a leading developer, manufacturer and supplier of real-time LiDAR sensor technology used in a variety of commercial applications including autonomous vehicles, vehicle safety systems, 3D mobile mapping, 3D aerial mapping and security.  For more information, visit www.velodynelidar.com.   For the latest information on new products and to receive Velodyne’s newsletter, register here.