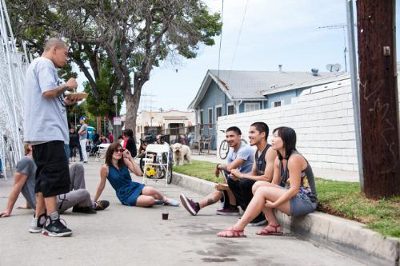 Starting today, you can cast your vote at la2050.org/challenge for innovative ideas that you believe will positively impact LA’s future. Ten submissions will win $100,000 to make their idea a reality. Voting begins September 2nd and ends on September 16th. Winning ideas will be announced on September 30th.

LA2050 is an initiative to create a shared vision for the future of Los Angeles, and to drive and track progress toward that vision. The initiative launched in 2013 with the release of the LA2050 Report which forecasts what the future of LA will look like in the year 2050 along eight key indicators of human development. With the release of the report, LA2050 launched the 2013 My LA2050 Grants Challenge, which awarded $1,000,000 in grants to ideas that changed that trajectory.

This year’s grants challenge launched on July 31st and has already exceeded expectations by receiving more than 260 submissions representing almost every corner of Los Angeles. More than 70 percent of submissions come from collaborative applications, meaning that two or more organizations are working together on their project.

Visit la2050.org/challenge to cast your vote in each of the five categories by September 16th. LA2050 will grant $100,000 to the idea that garners the most votes in each category.

“The overwhelmingly positive response we have received since launching LA2050 in 2013 has been incredible,” said Tara Roth, President of the Goldhirsh Foundation which is incubating the initiative. “LA has every problem and every solution represented here. And the My LA2050 Grants Challenge belongs to LA, it’s in our hands. We encourage all Angelenos to cast their votes for the ideas that they want to see come to life.”

At the Goldhirsh Foundation, (www.goldhirshfoundation.org), we connect the dots between the best emerging innovations and the financial, social, and human capital to make them thrive.

LA2050 (www.la2050.org) is an initiative to create a shared vision for the future of Los Angeles, and to drive and track progress toward that vision.