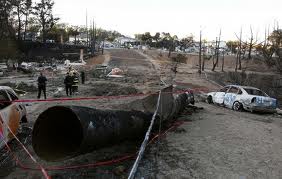 The California Public Utilities Commission (CPUC) today issued four decisions by two Administrative Law Judges in connection with
its investigations of Pacific Gas and Electric Company’s (PG&E) operations and practices related to gas transmission, including the pipeline rupture in San Bruno, Calif., in 2010, penalizing PG&E $1.4 billion, the largest safety related penalty ever levied by the CPUC.

The $1.4 billion penalty, when combined with the amount that the CPUC previously ruled must come from shareholders for
expenditures to improve the safe operation of natural gas pipelines (R.11-02-019), exceeds $2 billion. The penalty consists of $950 million to be paid to California’s General Fund, $400 million in pipeline improvements that cannot be recovered from
customers (called a disallowance), and approximately $50 million to be used to implement more than 75 remedies to enhance pipeline safety, including $30 million for the CPUC’s Safety and Enforcement Division to hire independent auditors to audit PG&E’s Pressure Validation project and Project Mariner implementation, training for emergencies (City of San Bruno), establishing
a centralized database to track location and use of salvaged pipe in PG&E’s gas transmission pipeline system, and 2 to pay reasonably
incurred litigation expenses of intervenors.

These penalties must be paid by PG&E’s shareholders and are not recoverable from PG&E’s customers. Within 60 days PG&E must submit a report to the CPUC providing the status of the progress and the timeframe for completion of each remedy ordered in the decisions.

The Administrative Law Judges’ decisions are available at:

For more information on the CPUC, please visit www.cpuc.ca.gov