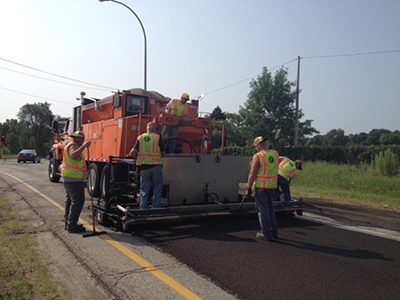 A machine that paves small segments of roadway to extend the life of the road is proving to be a good investment, according to the Minnesota Department of Transportation.

The truck-mounted paver lays a thin layer of protective seal coating on the existing pavement. The technique, called microsurfacing, has several benefits, one of which is $1.4 million savings in the first year of use, according to a Minnesota Department of Transportation news release.

“We’ve seen the results from it and it’s been nothing but positive,” said Cliff Gergen, MnDOT’s Metro District central region superintendent, said in a statement. “It’s already paid for itself and it puts another five to seven years of life back into the roadway and increases the ride quality.”

Microsurfacing is a cost-effective method to renew the road surface and seal minor cracks and other irregularities, such as pavement wheel ruts. The paver does smaller jobs such as short road segments and ramps.

Gergen said the paver microsurfaced about 70 miles since entering into service in 2012. That’s a cost savings of about $1.4 million in just the Twin Cities area.

“MnDOT does work that is immediately needed and not conducive to contracting out because of the length of the road, the work type or contracting timelines,” Gergen said.

Besides the cost savings, microsurfacing results in only minimal traffic delays. Most roads reopen within an hour after the new surface is put down. Normal removal of the top layer of pavement, called milling, and then placing a new layer, called overlay, can take days for the new surface to cure and the road to reopen.

The paver is a self-contained unit and the materials used in the microsurfacing process are stored separately to avoid contamination. Operators use an on-screen manual inside the truck to adjust the ratio of materials according to such factors as temperature and humidity.

“The whole process is more eco-friendly than mill and overlay,” Gergen said.

He also said the paver keeps crews from patching cracks in the road by hand.

“The materials we use increases friction of the roads around curves, so there’s a safety benefit as well,” he said.

Comments are disabled
NEXT ARTICLE
RI to Welcome Highway Safety Experts from Across the Northeast Next Week
September 2, 2014
PREVIOUS ARTICLE
Russia Launches Construction of Gas Pipeline to China
September 2, 2014