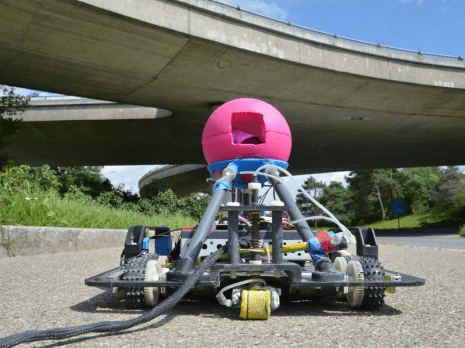 Bridges become an infrastructure problem as they get older, as de-icing salt and carbon dioxide gradually destroy the reinforced concrete. A new robot can now check the condition of these structures, even in places that people cannot reach.

We rely on Switzerland’s 3,500 motorway bridges – plus thousands more on cantonal roads – to carry us safely across valleys, streams, rivers and other roads. Most of these bridges have two factors in common: they are essential to Switzerland’s transport infrastructure and they are made of reinforced concrete. This material makes them safe and durable – until the onset of corrosion.

Corrosion occurs when chloride invades from de-icing salt and destroys the reinforcing steel inside concrete or when CO2 from the atmosphere lowers the concrete’s normally high pH. The damage becomes worse over time and is often visible only at a very advanced stage. In the long term, this can jeopardise the usability and safety of bridges and other supporting structures made of reinforced concrete. Furthermore, restoring these bridges is very expensive: the greater the damage caused by the corrosion, the more costly the repair work. “In addition, many bridges in Switzerland are already more than 50 years old, which makes corrosion increasingly problematic for Switzerland’s infrastructure,” explains Bernhard Elsener, professor at the Institute for Building Materials at ETH Zurich.

That is why Professor Elsener and a team of researchers developed the technology 25 years ago to identify corrosion at an early stage, attaching an electrode to a wheel and wheeling it across the surface of the reinforced concrete. The sensor measures the electric potential difference in the reinforced concrete – large differences mean that the reinforcement has already started to corrode in those areas. The data is transferred to a computer and then analysed.

This technology for measuring the potential variation has been used successfully for a long time in the inspection of bridges, says Elsener. But one problem remains: “The wheel electrode is attached to a stick and has to be wheeled manually. This means that many areas, such as supporting pillars and the undersides of high bridges, lie out of reach.”

Detecting Corrosion with a Robot 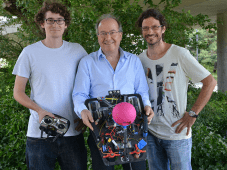 To solve this problem, the Institute for Building Materials joined forces with the Institute of Robotics and Intelligent Systems and formed a project team consisting of Bernhard Elsener, Alexis Leibbrandt, Oliver Glauser, Ueli Angst and Robert Flatt from the Institute for Building Materials, as well as Gilles Caprari from the Autonomous Systems Lab at ETH Zurich. The aim was to develop a robot that could detect corrosion in all areas – including sites inaccessible to people – and at the earliest possible stage. The researchers did not have to search long for a solution: “The students in one of our focus projects developed a robot four years ago that can move not only on the ground, but also along walls and ceilings. This made it ideal for our project,” explains Roland Siegwart, professor at the Institute of Robotics and Intelligent Systems and Vice President Research and Corporate Relations at ETH Zurich.

The robot’s movement is based on Vortex technology, where a type of propeller is attached to the underside of the robot. The propeller rotates fast enough for a movable suction cup to stick the robot on to walls and ceilings, where it can then use its wheels to move along these surfaces. The robot is steered via remote control or a computer.

“The robot was originally called Paraswift and was developed with a view to being used by Disney. When a camera is screwed on to the robot, it can easily film a room from all perspectives,” explains Siegwart. For the new project, the team rechristened Paraswift as C2D2 (Climbing Corrosion Detecting Device) and modified it for use as a corrosion detector: “We made the casing and wheels more robust and incorporated the corrosion-identification technology,” explains Elsener, who is spearheading the project.

The electrode is located on the underside of the robot and measures the potential difference of the reinforced concrete while the robot moves along the structure. A specialist then analyses the collected data. The engineers also attached a pink ball to the top of C2D2, which makes it easier for cameras to detect it and for researchers to control and locate it. This ball contains an additional camera that records the surroundings and enables the robot to identify and avoid any potential obstacles. 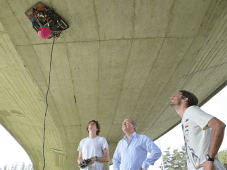 C2D2 on a test mission on the Einstein bridge at ETH’s Hönggerberg campus.

The team hope that by the end of the project in mid-2015, the robot will be able to identify and overcome such obstacles by itself. The researchers also intend to replace C2D2’s manual steering with a navigation system, which will make the robot autonomous, and they are currently working on a software program that will analyse much of the data itself.

The project team patented the robot in 2012. Companies interested in a license  can contact ETH transfer, the technology-transfer office at ETH Zurich. C2D2 has already proved its worth during tests on various bridges in Switzerland. The engineers now need only to optimise the robot for use on vertical surfaces. They will conduct more tests before the end of the project. The Federal Roads Office (FEDRO), which is funding the project, will decide based on these results whether to use C2D2 for regular bridge inspections in the future. This is something that Elsener definitely recommends: “C2D2 can help to create a safe and sustainable infrastructure at a relatively low cost – that was the motivation behind the project.”