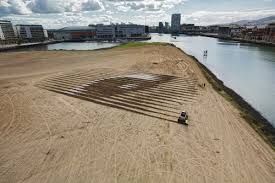 Topcon Positioning Group announces its technology and assistance will be used for the creation of a large-scale landscape portrait planned for the National Mall. Artist Jorge Rodríguez-Gerada is commissioned by the Smithsonian’s National Portrait Gallery to create a six-acre portrait that will be a composite of several different faces.  The project titled “Out of Many, One,” will utilize high-precision GPS survey technology from Topcon to create the “facescape” between the World War II and Lincoln memorials along the south side of the Reflecting Pool.  The portrait will be viewable from atop the Washington Monument.

Topcon is providing equipment and personnel to help create the portrait.  “Topcon GPS technology is my paintbrush,” said Rodríguez-Gerada. “This facescape would not be possible without the highly precise GPS and Hybrid Positioning equipment, as well as the technological expertise contributed by Topcon.”

“In a sense it is reverse surveying,” said Mark Contino, Topcon vice president of global marketing.  “Surveyors normally measure the real world and scale it down to readable maps. In this case, the project starts in the artist’s mind and each contour of his drawing will be redrawn in the field using stakes guided by Topcon GPS technology and MAGNET® Field software.”

The GPS positioning portion of the project will begin the week of September 15, 2014, and the final portrait is expected to be completed for unveiling in October.