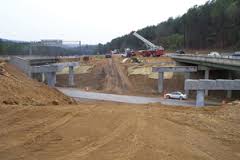 A project that increased traffic capacity, improved safety and reduced congestion along a major artery in southcentral Kentucky has been recognized with a regional transportation award for coming in under budget.
The Interstate 65 widening project in Barren County increased a 5-mile stretch from four lanes to six lanes and reconstructed the Exit 53 interchange. The project was delivered for about $41 million – about $2.6 million under the contract amount – earning an award in the “Under Budget – Medium” category in the Southeast Regional competition of the America’s Transportation Awards program.

The award was presented Tuesday at the annual Southeastern Association of State Highway and Transportation Officials (SASHTO) in New Orleans.

“Completing a project of this caliber under budget demonstrates the hard work and dedication that goes into every project we work on,” Kentucky Transportation Secretary Mike Hancock said.

“Congratulations to everyone involved in this project. Our team can take pride in this award, representing as it does a recognition of excellence from experts in the field. But the importance to the public will be in knowing that we are completing projects while also saving taxpayer money.”

The widening of I-65 in Barren County brought a higher level of service to a crowded section of heavily traveled highway. The project is one of several to widen I-65 in its entirety through Kentucky. The project is badly needed because of I-65’s importance as a commercial and travel corridor, stretching from Chicago to Mobile, Ala.

Many travelers on I-65 are passing through Kentucky on their way to other destinations. But many are also stopping at Kentucky attractions along the way. The section of road recently widened and the newly reconstructed Exit 53 interchange are a main artery for visitors to Mammoth Cave National Park, the world’s longest known cave system. The park receives more than 500,000 visitors a year, and most arrive via I-65. The new interchange at Exit 53 is listed as the primary exit on the park’s directions.

Comments are disabled
NEXT ARTICLE
Is the Electrical Grid Destined to Go the Way of the Telephone?
August 28, 2014
PREVIOUS ARTICLE
Washington Adds New Cameras and Signs for Real-time Traffic Updates Along SR 539 and SR9
August 28, 2014