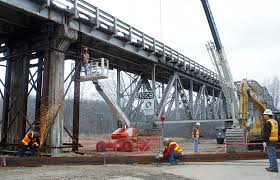 Governor Andrew M. Cuomo today announced that the Federal Emergency Management Agency has approved $47.8 million in funding to strengthen 20 bridges that cross water and are vulnerable to foundation erosion in New York State. The funding is available through FEMA’s Hazard Mitigation Grant Program, which aims to increase resiliency, reduce hardship and mitigate the risks of loss and damage from natural disasters.

“Part of adjusting to the new reality of extreme weather means we must bolster our infrastructure to be stronger than it ever was before – so that we rebuild with the next major storm in mind,” Governor Cuomo said. “This investment allows us to make bridges across the State more resilient in the face of severe weather, and that means safer communities for the future.”

Governor Cuomo has requested a total of $518 million in Federal funding to strengthen 105 bridges across the State. The bridges could be subject to scour, which erodes foundation materials, such as sand and rocks, from around and beneath bridge abutments, piers, foundations and embankments. Upgrading these bridges will help protect critical transportation routes across the State, ensuring access to emergency services during and after flood events and reducing the risk of flooding where bridge openings cause rivers and streams to back up.

In June 2013, Governor Cuomo announced a call for projects to be funded by the hazard mitigation program to help rebuild stronger, more sustainable communities. The applications continue to be reviewed by FEMA and the State awaits their expeditious approval. The bridge scour program is the product of an unprecedented collaboration between the State’s Department of Transportation, Division of Homeland Security and Emergency Services, Governor’s Office of Storm Recovery, and dozens of local governments, and puts New York State at the cutting edge of innovative flood recovery and mitigation activities.

New York State Department of Transportation Commissioner Joan McDonald said, “Governor Cuomo knows the importance of transportation and his leadership is helping ensure that our roads and bridges are hardened against harsh weather. Because of the Governor’s initiative and the assistance of our State, local and Federal partners, bridges all across New York State are going to be stronger and last longer.”

The bridge scour program will be paid for with a mix of funding from FEMA and the U.S. Department of Housing and Urban Development. No state funding will be required.

The Department of Transportation has identified 105 bridges as scour-critical, which are those most at risk from repeated flooding. All of the bridges included in this program of upgrades and retrofits were built to the codes and standards of their time and remain safe and open for everyday traffic. However, due to a variety of natural severe weather events and the increasing frequency of major storms and floods, they are vulnerable to scour caused by the intensity and velocity of water from extreme natural events.

FEMA’s grant approval enables the Department of Transportation to contract for the bridge improvement work, including upgrading concrete bridge abutments by adding steel or concrete pile foundations, increasing the size of waterway openings to meet 100-year flood projections and reducing or eliminating the number of bridge piers in the water to prevent ice jams that can flood surrounding areas.

The bridges and grant amounts approved in this round of funding are listed below:

Congressman Paul Tonko said, “Strengthening our existing infrastructure is critical to ensuring we are prepared for the next severe weather event. I thank Governor Cuomo for his attention to this urgent need not only in the Capital Region, but throughout the State. Moving forward, the nation must follow New York’s lead and act on the issue of climate change. Prevention and hardening of infrastructure save taxpayer dollars and increase security.”

Congressman Bill Owens said, “Maintaining local roads and bridges is vital to travelers, residents and local businesses that use them every day. Investing in a stronger foundation for this 80-year-old bridge in Greenfield, which supports an average of more than 6,000 vehicles per day, will save money down the road and help ensure that all of us will be able to use this route for many years to come.”

Congressman Tom Reed said, “Bridges in the Southern Tier and Finger Lakes play critical roles in our everyday lives but because of New York’s ever-changing weather, many bridges are in need of repair. We’re proud to partner with State and local leaders to make sure our area bridges are safe and reliable for all who use them. Between strengthening basic infrastructure and flood mitigation efforts, these are much-needed repairs that care for public safety and are a fair use of taxpayer dollars everyone benefits from. It’s the right thing to do and I’m happy to see these projects moving forward.”

Congressman Chris Gibson said, “Routes 22 and 43 provide crucial access to Columbia and Rensselaer Counties. Strengthening these bridges is critical to public safety and our economic well being. I am proud to support Federal investments in our infrastructure, and I am delighted to see these resources put to work in the 19th Congressional District.”

Congressman Dan Maffei said, “Central New York is an important hub for commerce for the East Coast and beyond. We must repair our bridges in poor condition and prioritize smart investments to facilitate long-term economic growth. This much-needed funding will help upgrade damaged bridges in our region, and I will continue to work to secure Federal funding to make improvements to our local transportation infrastructure.”

Congressman Sean Patrick Maloney said, “My neighbors along the Wallkill River were some of the hardest hit by recent storms and this investment in our local infrastructure will not only keep our families, communities and small businesses safe during a storm, but it will create jobs and grow our economy. This is a classic ‘stitch in time saves nine’ situation and I will continue to partner with State and local officials to secure Federal and State funding to make our bridges safer and stronger.”