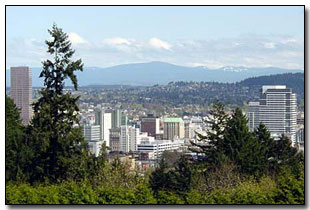 Grand Rapids, MI Mayor George K. Heartwell and Beaverton, OR Mayor Denny Doyle have been selected as the nation’s top winners in the 2012 Mayors’ Climate Protection Awards, an initiative sponsored by The U.S. Conference of Mayors (USCM) and Walmart.

The annual awards program is in its sixth year and recognizes mayors for innovative practices in their cities that increase energy efficiency and reduce greenhouse gas emissions. An independent panel of judges selected the winners from a pool of more than 100 applicants.

“Mayor Heartwell and Mayor Doyle have done an outstanding job developing climate protection programs that will serve as models for the rest of the country,” said Los Angeles Mayor Antonio Villaraigosa, President of the U.S. Conference of Mayors. “These awards prove that cities large and small are making extra efforts to launch innovative programs to protect our environment.”

“We are proud to honor these cities and their mayors, who remind all of us how their leadership is making a real difference in protecting the climate and improving the quality of life in their communities,” said Amy Hill, Walmart’s Senior Director of Public Affairs and Government Relations. “At the end of the day, local efforts, which increase sustainability and save money, provide results that strengthen the U.S. economy.”

“The City of Grand Rapids, Michigan is a proven leader in sustainability planning with a focus on reducing the negative impact of green-house gas emissions through a variety of measures such as energy efficiency, renewable energy, and conservation efforts. We are proud to receive this national recognition from the US Conference of Mayors,” said Grand Rapids Mayor George K. Heartwell. “Our goal is to continue to work on creating an equitable community with economic opportunities for all and protecting the environment for current and future generations.”

“The city is honored to be nationally recognized for our sustainability efforts,” said Beaverton Mayor Denny Doyle. “In 2009, we reached out to 5,000 residents and they provided clear direction that we do everything we can to reduce our carbon emissions. It’s simply the right thing to do.”

Grand Rapids (MI) Mayor George K. Heartwell for its Large City Category – population over 100,000
The City of Grand Rapids has set forth a very unique multi-year Sustainability Plan with over 200 very specific economic, environmental, and social targets. As one of the early signatories of the US Conference of Mayors Climate Protection Agreement, Grand Rapids’ commitment to reducing green house gas emissions has been demonstrated through multiple projects such as: energy efficiency improvements in City buildings with a 15% reduction in electricity consumption; an innovative energy audit program in the neighborhoods; solar panel placement on the City’s existing LEED certified building; a commitment of 22% of renewable energy in its electricity portfolio (with a planned expansion of this commitment); geothermal projects at fire stations; installation of Electric Vehicle Charging stations at city’s downtown parking ramps; an increased recycling rate through community engagement; innovative sustainability planning; and a community wide active sustainability network involving over 200 private and public organizations. All of the efforts are measured, tracked, and reported providing for transparency and accounting of all green house gas emissions in order to meet the targets to reduce emissions.

Beaverton (OR) Mayor Denny Doyle for the Small City Category – population under 100,000
Solar Beaverton is a community, bulk-purchase solar program led by Beaverton’s Sustainability Division. The program did the work for residents, whether it was negotiating solar prices or setting up an easy installation program. The Solar Beaverton program: increased use of renewable energy in the city; reduced greenhouse gas emissions (GHGs); simplified the process of installing solar; created jobs that support local contractors and manufacturers; and helped residents take advantage of financial incentives. Solar Beaverton is part of the city’s efforts to support low-carbon lifestyles, energy efficiency and security, health and well-being, and eco-system stewardship. The program is part of a larger city commitment to reduce emissions under its Greenhouse Gas Emissions Program. With no existing strategy, the program was created to strategically guide the city forward. Led by Mayor Doyle and the city’s Sustainability Division, the program aims to positively impact climate change by creating a GHG emissions inventory, set forth goals, actions, and indicators, develop a Strategic Climate Action Plan and report to the public and engage them in programs.

The U.S. Conference of Mayors is the official nonpartisan organization of cities with populations of 30,000 or more. There are 1,210 such cities in the country today, and each city is represented in the Conference by its chief elected official, the mayor. Find us at usmayors.org, on facebook.com/usmayors, or follow us on Twitter at twitter.com/usmayors.