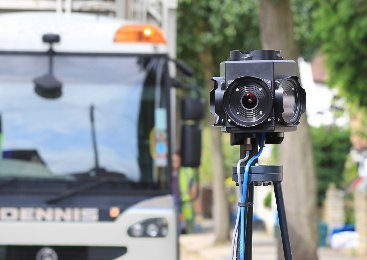 Veolia, which provides refuse and recycling collections and street cleansing services to a number of London Boroughs and local authorities across the country, was looking for an effective way of monitoring its operations, as well as collecting data that would inform planning for service improvements.

“We already used a good GPS system and wanted to add video monitoring that would integrate with that and give us the functionality and flexibility to monitor, map and analyse issues in real time,” says Tim Cattermoul, Veolia’s Central London Business Performance Manager.

“We explained our objectives to SphereVision, and they worked with us and our GPS provider to turn our high level vision into a creative solution that has given us exactly the capabilities we wanted.”

The system created for Veolia consists of a car fitted with a roof mounted 360-degree video camera linked to a portable recording system operating with SphereVision’s advanced data processing software. Developers have created a novel function that allows the operator to trigger the system to take additional pictures and clips of specific issues such as overflowing waste bins or uncollected rubbish.

The footage captured provides a view in all directions, and because the system automatically captures GPS, date and other data, analysts can identify trends and pinpoint hot spots and problems such as rubbish being put out after collection times.

“We liken the experience to being a tourist on an open top bus – we can see exactly what they would see, and can sort out problems quickly and efficiently,” says Tim.

Video monitoring is also proving valuable in providing better customer services, enabling the company to be proactive in spotting missed collections, fly tipping and other issues, often identifying and rectifying issues before customers have even reported them.

Veolia’s monitoring service operates five days a week, and the benefits have more than outweighed the investment in the system. Now one auditor can cover the ground that would have taken four, and because data is captured digitally, the company can analyse and interrogate it in a way that would have been impossible before.

Tim says that it was important to Veolia to work with a company that could give them a bespoke service: “SphereVision really know what they are doing and you can really see the passion they have for their software and their system.

“They have created an ad-hoc system for us which always intrigues and impresses prospective clients whenever we demonstrate it. The team at SphereVision are always excited about what they are working on, and often approach us with new developments to try to see if they can make our system even better.”

Arithmetica is an innovator in 360 degree imaging solutions and automated laser scanning data processing software.  Located at Shepperton Studios near London, Arithmetica is the company behind SphereVision and Pointfuse.   SphereVision is a 360 degree video mapping and recording system with software applications that allow users to build interactive solutions.  Video and stills integrate with building layouts, maps, plans and satellite views to produce interactive viewers for Web, Windows and Mobiles/Tablets.  Pointfuse is ground-breaking software builds 3D Vector Models from Point Clouds completely automatically with features for the automatic generation of 2D Elevations, Plans and Sections.