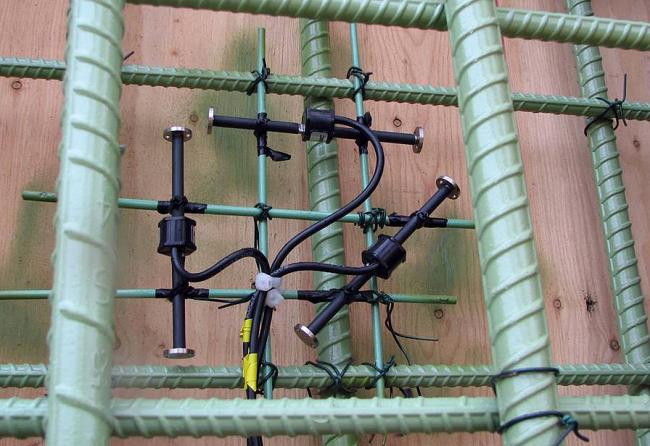 As a report from the Obama administration warns that one in four bridges in the United States needs significant repair or cannot handle automobile traffic, Tufts University engineers are employing wireless sensors and flying robots that could have the potential to help authorities monitor the condition of bridges in real time.

Today, bridges are inspected visually by teams of engineers who dangle beneath the bridge on cables or look up at the bridge from an elevated work platform. It is a slow, dangerous, expensive process and even the most experienced engineers can overlook cracks in the structure or other critical deficiencies.

A New Monitoring System for Bridges

In the detection system being developed by Babak Moaveni, an assistant professor of civil and environmental engineering at Tufts School of Engineering, smart sensors are attached permanently to bridge beams and joints. Each sensor can continuously record vibrations and process the recorded signal. Changes in the vibration response can signify damage, he says.

Moaveni, who received a grant from the National Science Foundation (NSF) for his research, is collaborating with Tufts Assistant Professor of Electrical and Computer Engineering Usman Khan to develop a wireless system that would use autonomous flying robots (quad-copters) to hover near the sensors and collect data while taking visual images of bridge conditions. The drone-like robots would transmit data to a central collection point for analysis. Khan received a $400,000 Early Career Award from the NSF earlier this year to explore this technology, which requires addressing significant navigational and communications challenges before it could be a reliable inspection tool.

The recent Obama administration report that analyzed the condition of the transportation infrastructure, points across the country out that 25 percent of the approximately 600,000 bridges are in such a poor state that they are incapable of handling daily automobile traffic. In Massachusetts, more than 50 percent of the 5,136 bridges in use are deficient, the report says.

Moaveni and Khan’s work could help monitor bridges and identify those that are at risk more accurately than current methods. Once installed, the sensors would provide information about the condition of bridges that cannot be obtained by visual inspection alone and would allow authorities to identify and focus on bridges that need immediate attention.

Moaveni installed a network of 10 wired sensors in 2009 on a 145-foot long footbridge on Tufts’ Medford/Somerville campus. In 2011, Moaveni added nearly 5,000 pounds of concrete weights on the bridge deck to simulate the effects of damage on the bridge—a load well within the bridge’s limits.

Connected by cables, the sensors recorded readings on vibration levels as pedestrians walked across the span before and after installation of the concrete blocks. From the changes in vibration measurements, Moaveni and his research team could successfully identify the simulated damage on the bridge, validating his vibration-based monitoring framework.

A major goal of his research, Moaveni says, is to develop computer algorithms that can automatically detect damage in a bridge from the changes in its vibration measurements. His work is ongoing. “Right now, if a bridge has severe damage, we’re pretty confident we can detect that accurately. The challenge is building the system so it picks up small, less obvious anomalies.”

Located on Tufts’ Medford/Somerville campus, the School of Engineering offers a rigorous engineering education in a unique environment that blends the intellectual and technological resources of a world-class research university with the strengths of a top-ranked liberal arts college. Close partnerships with Tufts’ excellent undergraduate, graduate and professional schools, coupled with a long tradition of collaboration, provide a strong platform for interdisciplinary education and scholarship. The School of Engineering’s mission is to educate engineers committed to the innovative and ethical application of science and technology in addressing the most pressing societal needs, to develop and nurture twenty-first century leadership qualities in its students, faculty, and alumni, and to create and disseminate transformational new knowledge and technologies that further the well-being and sustainability of society in such cross-cutting areas as human health, environmental sustainability, alternative energy, and the human-technology interface.