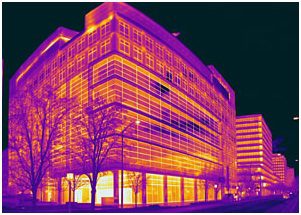 The imaging system consists of a custom-designed multi-sensor rig integrated onto the top of the vehicle.  As the vehicle drives, the thermal cameras measure the heat signature of the buildings, and the LiDAR imaging rig captures the structures in 3D on both sides of the car, enabling Essess to image large geographic areas each night.  The images are stored onboard the vehicle using a custom-built data recording system and then processed at Essess headquarters in Boston.

The HDL-32E from Velodyne’s LiDAR Division (www.velodynelidar.com) is part of a growing family of solutions built around the company’s Light Detection and Ranging technology.

“Our hardware and software capabilities constitute the single most effective way to capture heat loss and building envelope data via drive-by thermal imaging, and we’re delighted that Velodyne LiDAR technology is such an integral part of our solution,” said Tom Scaramellino, President and Chief Executive Officer, Essess. “Each camera captures data in a video format, meaning that we generate hundreds of thousands of thermal images comprising more than two terabytes of data each night. The Velodyne LIDAR sensors enable us to produce a 3D map of the physical environment and map buildings to parcels with exceptional accuracy. “
“Essess’ thermal imaging technology was developed by leading MIT researchers to address the problem of identifying energy loss and facilitating structural improvements to building envelopes cost-effectively – an application that is a natural fit with our 3D LiDAR,” said Wolfgang Juchmann, Director of Sales & Marketing, Velodyne LiDAR.

The industry currently relies on on-site audits for residential and small commercial units — difficult to implement on a large scale, given the time and expense required to conduct an audit on each unit.  The inherent scalability of Essess’ thermal imaging technology means that electric and gas utilities can scan their entire service territories in a matter of days or weeks, deriving thermal and 3D structural intelligence that had been far too costly to obtain.

About Essess
Essess is a mobile thermal imaging company based in the Innovation District of Boston that delivers scalable and actionable building envelope advice. Essess’ mobile thermal imaging technology has several advantages over traditional energy auditing systems. The high-throughput speed of the Essess mobile imaging system performs energy audits an order of magnitude faster than manual imaging and analysis. In addition to its speed, the imaging system enables Essess to provide full quantitative measurement and analysis of the energy leaking from all buildings across large territories. Such quantitative information allows for significantly better targeting and prioritizing of buildings for energy efficiency measures. Essess’ technology can also be deployed in the context of electric grid or city infrastructure audits and various other heat mapping applications. For more information, please visit essess.com or contact info@essess.com.

About Velodyne LiDAR
Founded in 1983 and based in California’s Silicon Valley, Velodyne Acoustics, Inc. is a diversified technology company known worldwide for its high-performance audio equipment and real-time LiDAR sensors.  The company’s LiDAR division evolved after founder and inventor David Hall competed in the 2004-05 DARPA Grand Challenge using stereovision technology.  Based on his experience during this challenge, Hall recognized the limitations of stereovision and developed the HDL64 high-resolution LiDAR sensor.  More recently, Velodyne has released its smaller, lightweight HDL‑32E sensor, available for many applications including UAVs.  Since 2007, Velodyne’s LiDAR division has emerged as a leading developer, manufacturer and supplier of real-time LiDAR sensor technology used in a variety of commercial applications including autonomous vehicles, vehicle safety systems, 3D mobile mapping, 3D aerial mapping and security.  For more information, visit www.velodynelidar.com.