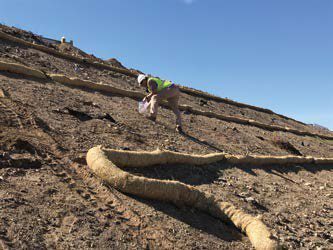 In December 2017, the Freeway Fire ignited the brush along the Interstate 210/Interstate 15 interchange near Rancho Cucamonga, Calif. Due to high winds, the blaze quickly spread and burned more than 20 acres of land before firefighters were able to get it under control. With acres of precious vegetation burned on the side of a well-traveled interstate, the California Department of Transportation (Caltrans) needed a quick and accurate solution that would restore vegetation and protect the environment from post-burn dangers.

The clear prescription was Profile’s ProGanics® Biotic Soil Media™, a compost and topsoil alternative that accelerates the development of depleted soils and substrates with low organic matter, low nutrient levels and limited biological activity. ProGanics is applied with less equipment, in less time and with less labor than traditional compost. When failure isn’t an option, ProGanics is the solution.

The Interstate 210/Interstate 15 interchange seamlessly weaves together two of the most traveled roads in San Bernardino County, connecting many of Southern California’s largest cities. Each day, thousands of cars and trucks use the interchange. If a lane is forced to close, traffic backups can stretch for miles.

When the Freeway Fire reached Rancho Cucamonga on Dec. 9, 2017, the fire shut down portions of the roadway and torched the berm. Caltrans selected Pacific Restoration Group Inc. as the contractor for the project, emphasizing the importance of finding a solution that could work around the heavy traffic and stand up to public scrutiny. Danny Richards, vice president and operations manager of Pacific Restoration Group, worked with Danny Reynaga, western regional sales manager of Profile Products, and distributor partner Stover Seed.

“Anything you do with public money in a very public place, like the middle of the freeway, there’s a lot of people looking at it,” says Steve Knutson, the CEO of Stover Seed. “They want to do it right, so there’s a good showing.”

First, the team conducted soil tests to determine the nutrient levels and organic matter present in the soil. Using Profile’s Soil Solutions Software (PS3), a comprehensive source for designing and selecting the right products to address the physical and chemical properties of soil and site characteristics, the team discovered the soil had low organic matter between 1.5 and 2.2 percent. Healthy soil is the necessary infrastructure to support and nurture vegetation. Pacific Restoration Group worked with Joe McLoughlin, owner of McLoughlin Engineering Co. Inc., and Jared Anderson, the landscape architect for Caltrans District 8, to recommend using ProGanics across the site to provide the organic matter and biological constituents that would help sustainably establish the vegetation the site required.

In late February 2018, Pacific Restoration Group hydraulically applied ProGanics at 4,000 pounds per acre using a 3,300-gallon hydroseeder. This greatly cut down on the amount of time and labor it took to apply the product as compared to incorporated compost. Bringing in compost would have meant shutting down a portion of the interstate for trucks to safely access the site. With thousands of cars driving by, safety had to be top of mind for the workers and motorists.

“With ProGanics, you minimize your vehicle traffic,” adds Knutson. “With that low organic matter, they would have had to bring in lots of compost to bulk up that organic matter. You’re talking multiple trucks in and out of there with loose compost that flies around as the trucks are taking off empty. That’s a hazard.”

Southern California is consistently listed as one of the best places to live because its residents rarely see a rainy day. In fact, Rancho Cucamonga sees an average of less than 16 inches of rain per year; the bulk of it falls from January to March. Although the San Bernardino sunshine may make for a great place to live, it can be a limiting factor when trying to establish vegetation. Because of this, picking the proper plant species and stimulants is crucial. Caltrans specified using their Seed Mix #2 applied at 17 pounds per acre of Pure Live Seed (PLS).

“These are difficult projects, because there is no irrigation, and it was kind of late in the game,” notes Knutson. “Our spring rains, or the bulk of our rains, had already passed. But we wanted to get something out there for temporary ground cover and long-term growth.”

To achieve this goal, Pacific Restoration Group bolstered the ProGanics with Profile’s BioPrime™ (80 pounds per acre) and JumpStart™ (2.5 gallons per acre) additives. BioPrime is a biostimulant that helps improve long-term plant vitality with slow-release nitrogen, ultimately increasing root mass, top growth and cell structure. JumpStart is used to accelerate germination and vegetation establishment. In arid climates, these products are critical to establishing growth. The ProGanics, BioPrime, JumpStart and seed mix were all hydraulically applied at the same time using one hydroseeding machine, increasing the productivity and efficiency of the site.

To protect the site from erosion, Pacific Restoration Group applied Profile’s ProMatrix™ Engineered Fiber Matrix™ at 3,000 pounds per acre. ProMatrix is a cost-effective reinforced fiber mulch that immediately bonds to the soil surface and promotes rapid germination and vegetative establishment. It uses non-toxic, biodegradable, recycled and phyto-sanitized components with no nettings, threads or staples to endanger wildlife. ProMatrix is also hydraulically applied with a hydroseeding machine. As the first truck finished spraying ProGanics, the second truck followed with the application of the ProMatrix. A portion of the scorched berm along the Interstate 210/Interstate 15 interchange in Rancho Cucamonga, Calif., in January 2018. Vegetation growth from the same site in April 2018, less than two months after
application with ProGanics® Biotic Soil Media™.

From March to May 2018, the site received 1.7 inches of rain, the bulk of which fell in early March. Despite the lack of rainfall, by mid-April the site already had a blanket of green vegetation with purple and yellow wildflowers.

“The fact that the vegetation is up and looking so good is pretty unique,” says Knutson. “Usually on a site with poor rainfall, you’ll see some plants and some color. But that was pretty staggering as to how much [the site] had. It was pretty uniform, which I would attribute to JumpStart and ProGanics. That’s a big differentiator.”

This prescription took this difficult site from scorched earth to colorful vegetation in less than three months. Knutson said ProGanics not only provided solid results on this site, but also on all the projects he’s used it for.

“In the projects that we’ve seen from start to finish,” he adds, “we see much better results with ProGanics in terms of germination on non-irrigated sites, and certainly the increase of organic material in the soil is helpful for plants to establish for their longevity.”

Click here to view video related to this project.