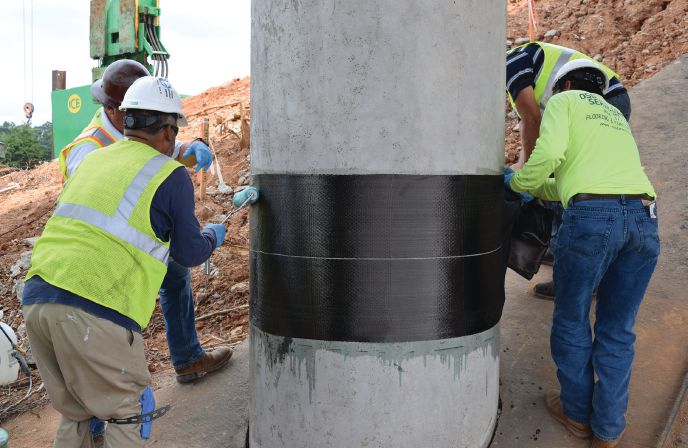 In June 2016, the South Carolina DOT (SCDOT) was in the midst of building a new interchange at the intersection of I-85/I-385 in Greenville, S.C. During construction, severe localized spalling was found on the cover concrete of one column of a two-column pier supporting the I-385 northbound ramp. Upon discovery, SCDOT and its consultant closed the ramp to all traffic until a detailed inspection could be made. A construction crew applies an epoxy resin coat while simultaneously wrapping the high-strength carbon-fiber fabric, which is placed directly on the surface of the column Construction crews wrap a column under a support bridge on South Carolina’s I-385 to restore load-rating capacity.

After inspecting the affected column, it was determined that immediate repairs were required before allowing truck traffic on the ramp. The SCDOT and its consultants designed a traditional concrete jacketing repair where the 30-inch diameter column was enlarged to a square footprint. The emergency repairs were designed, approved and constructed in less than two weeks.

Post-repair inspection of all the columns and pier caps of the old interchange revealed various degrees of corrosion on the reinforcing steel, with the most severe occurring at construction joints. Cracks and small, localized delamination of sections of cover concrete were observed on many of the columns throughout the old interchange, including the column adjacent to the jacket-repaired column.

Although these deficiencies were not severe enough to warrant extensive strengthening of the columns, they were treated as potential hazards to both the traveling public and the construction teams working around the structures. The SCDOT and joint-venture design-build contractor Flatiron-Zachry sought an economical, high-strength alternative solution to confine the damaged sections of the columns until they were demolished during the eventual reconstruction of the interchange.

Milliken Infrastructure approached the SCDOT and Flatiron-Zachry to learn more about the problem and to determine if its RenewWrap Fiber-Reinforced Polymer (FRP) strengthening system could provide a quick repair for the deficient columns. A qualified engineer inspects and instructs on the technique and quality of the RenewWrap strengthening system application to the column. The RenewWrap system consists of high-strength carbon-fiber fabrics that are coated in the field with epoxy resins and bonded to or—in the case of the column repairs—wrapped around the structure to strengthen the member being repaired.

Every structural strengthening project is unique, so qualified engineers were onsite to provide instruction and technical support to keep the project on-track and help ensure success. With consistently high traffic on the I-85/I-385 intersection, it was imperative to keep public disruption minimal as well as ensure the safety of the traveling public and construction workers at the jobsite while the new interchange is being constructed. The success of this project led to the wrapping of several more columns at the jobsite.

The thousands of carbon-fiber filaments in the FRP fabric perform the same function as reinforcing steel bars, but with the added advantage of being noncorrosive, which allows for placement directly on the surface of the columns.

Gregg Blaszak is a licensed engineer in six states with more than 15 yearsof experience with the design and construction of fiber reinforced polymermaterials (FRPs) for civil/structural applications. He holds a BS degree inAeronautical Engineering and an MS degree in Civil Engineering, both fromthe University of Illinois; email: gregg.blaszak@milliken.com.