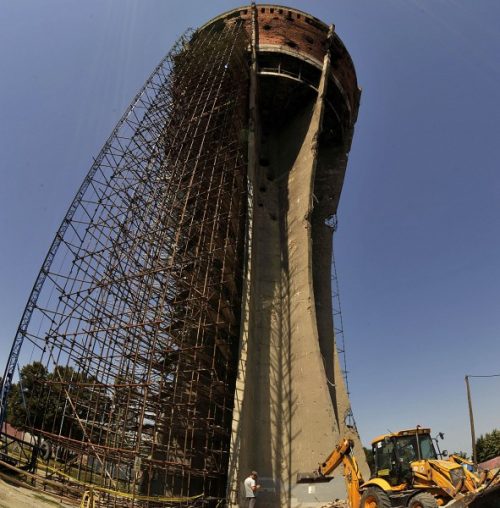 After being used for construction of the most famous structures in the world such as the Pentagon, Empire State Building and Burj Khalifa, MCI® technology is used to preserve Vukovar’s water tower hit more than 600 times during the siege of the city.

Cortec® Corporation donated funds for reconstruction of Vukovar water tower that was almost destroyed in 90’s during Croatian War of Independence.  Water tower is the most famous symbol of city’s suffering during the Battle of Vukovar but also victory and new life.  It was one of the most frequent targets of artillery but never collapsed. For preservation of the tower Cortec® donated its world renowned MCI® technology that revolutionized the way of extending service life of concrete structures. Technology is aimed to prevent corrosion of reinforced concrete structures of the water tower as part of the memorial monument project. Construction work on the monument has started and is now at the highest level of activity. Corroded surfaces of the water tower have been unprotected and rusting for 23 years since the war ended. After having removed mechanically loose rust and scale, Cortec’s CorrVerter® MCI® was applied by brush directly to metal surfaces. This environmentally-friendly, fast-drying, water-based primer converts rust into a hydrophobic passive layer. The coating offers a convenient, low-labor option when performing repairs on heavily corroded rebar and other metal surfaces. It penetrates and eliminates rust and protects bare metal against further rusting. CorrVerter® works by combining a unique formulation of chelating agents with a high solids waterborne latex that has extremely low water vapor permeability. The coating is recommended for application to rusty or poorly prepared steel surfaces where further corrosion protection is required and where good surface preparation is difficult to achieve.

Water tower structure will not be restored to its original function, instead it will become a memorial to remind about the suffering and pain lived through by the City of Vukovar.

Croatian-American entrepreneur – Boris Miksic, CEO of Cortec® Corporation participated in numerous projects during his long term career but notes that restoration of Vukovar’s tower has a special significance: “This is a very emotional moment as Vukovar is in the heart of every Croatian citizen. We are proud to donate this technology which will preserve Vukovar’s monument for all generations to come. This symbol of one of the most destructive wars in modern history is warning that it must never happen again.”