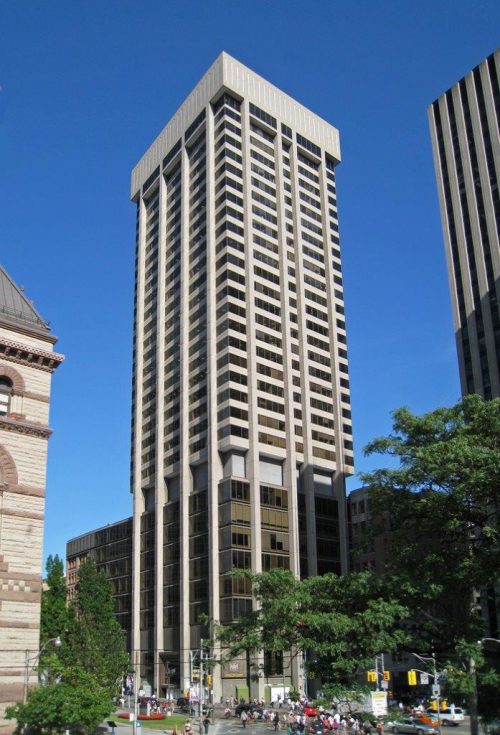 CINTEC North America, designer and manufacturer of the CINTEC Reinforcing Anchor System, announces it recently helped restore the Simpson Tower, a famous Canadian landmark, and one of the tallest buildings in Toronto.

WSP Canada Inc., the structural and facade engineering consultants for the over-cladding of the Simpson Tower, contacted CINTEC, whose innovative reinforcing technology was a perfect fit for the major restoration project. Additionally, D.F. Pray was retained as construction manager during the design, pre-construction and construction phases for the project.

All three companies worked together to restore the masonry panel–clad building, which was beginning to show signs of age.   The CINTEC system reattached the cast panels (as a result of failing ties) while providing anchor points for a new glass curtain wall. WSP and CINTEC reworked potential solutions until the anchors developed were unique, project specific and withstood testing and application.

The CINTEC Reinforcing Anchoring System is performed by installing a steel bar, which is carefully enclosed in a mesh fabric sleeve, into the façade, and then injecting under low pressure a specially developed, proprietary grout. Through this innovative approach, the project was completed without having to remove and inconvenience tenants, and as a further benefit, improve the “class” of the building while also addressing the ever-present Green Policy.

Robert Lloyd-Rees, COO of CINTEC North America, said: “The Simpson Tower is just one example of the many projects that we have undertaken over the last decade, restoring some of North America’s most iconic buildings using CINTEC’s extremely successful, patented anchoring system.”

Peter James, chairman of CINTEC International added: “Robert and his team’s recent completion of the historic Simpson Tower in Toronto is a perfect illustration of how we develop solutions to structural problems in high-rise buildings, as well as some of the world’s oldest and most-treasured archeological monuments.”