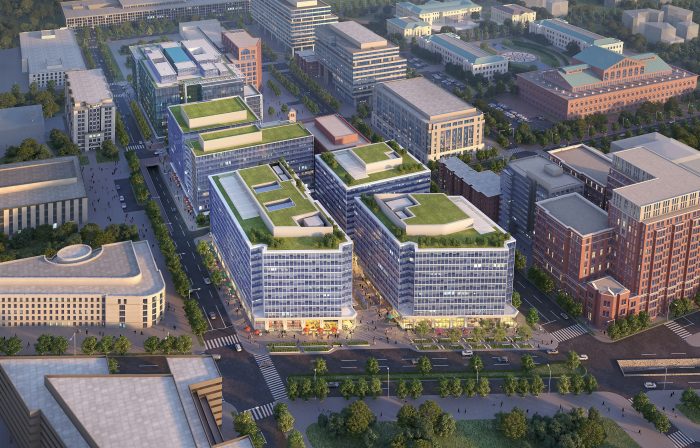 Stormwater management is a challenge for most cities, but this is particularly true for highly urbanized areas such as Washington, D.C., where there’s little remaining open space for conventional stormwater management infrastructure such as detention or retention ponds. Under federal law, the city is required to control the amount of stormwater that enters its local watersheds (Potomac and Anacostia) and reduce the amount of pollutants the stormwater contains.

District agencies, such as the Department of Energy and Environment (DOEE), are actively involved in developing practices that reduce pollutants at the source, long before they enter critical water bodies. Toward that end, DOEE now has a vigorous stormwater program, including regulations that require large construction projects to install and maintain practices to meet stormwater retention performance standards.

The need to meet these regulations is just one of the many stormwater challenges associated with the Capitol Crossing development, one of Washington, D.C.’s most ambitious construction projects. Nine years in the making, the $1.3 billion project is transforming seven acres of land above Interstate 395 (I-395) into a 2.2-million-square-foot complex of five mixed-use buildings. When the project is completed in 2021, it will include offices, housing and almost 70,000 square feet of retail space; more than 1,100 parking spaces; and a $200 million concrete platform that will connect neighborhoods that have been severed by the freeway for years.

Capitol Crossing’s developers, Property Group Partners, intend for the project to create a greener, more-sustainable city by creating an eco-district in the nation’s capitol. The five buildings are expected to exceed LEED Platinum certification standards by incorporating districtwide energy co-generation, eco-chimneys that employ biofilters to clean exhaust and other toxins from the highway and underground parking structure, and a centralized water collection and reuse system that will treat more than 90 percent of stormwater runoff. Skidmore, Owings & Merrill serves as the project’s master planner.

In keeping with the project’s design goals, water efficiency is a priority. However, site limitations—working over and around I-395—posed some significant challenges, particularly regarding stormwater treatment and reuse.

“Really, there was no site for us to work with,” explains Stephen Kalach, a senior plumbing engineer with Interface Engineering and a member of the project’s stormwater system design team. “It’s all building. There’s no space outside the property line that isn’t building, so every piece of equipment had to land inside whether it wanted to or not.”

Led by Jay Schwab, a vice president at W.E. Bowers, the design team decided to use six CDS Hydrodynamic Separator systems from Contech Engineered Solutions as the site’s primary treatment method to screen, separate and trap trash, debris, sediment and hydrocarbons from stormwater runoff. The treatment process begins when stormwater enters the system through an inlet flume that guides the treatment flow into the unit’s separation chamber, where water velocities in the chamber create a swirling vortex. At the heart of the CDS system is a unique, indirect treatment screen. Water velocities within the swirl chamber continually deflect debris off the specially designed screen to keep it clean.

The combination of swirl concentration and indirect screening forces floatables and solids to the center of the separation chamber. Debris larger than the screen aperture is trapped in the chamber, and sediment settles into an isolated sump. Pollutants remain in these sections of the unit until they’re removed during maintenance.

In the case of the Capitol Crossing project, treated stormwater moves under each unit’s hydrocarbon baffle, exits the system, and is discharged into several cisterns that integrate skid-mounted systems to filter and treat the stormwater for reuse within each building. The site’s groundwater also flows into the cisterns for reuse. In total, the Capitol Crossing site has 124,500 gallons of rainwater storage and 51,120 gallons of groundwater storage. Capitol Crossing’s environmental features will include innovative use of eco-chimneys made of large plants to filter garage exhaust. The project also will include rooftop green areas and water-recapture systems combined with a co-generation plant to generate electricity and heat at the same time. The fact that the CDS units typically are installed underground posed another set of design challenges for the Capitol Crossing project.

“With this project, they were building above the highway, so everything was going up,” says Brittney Schmidt, a stormwater design engineer at Contech. “They really didn’t have any space to put anything underground.”

The solution was to install the CDS units, ranging from 15 to 20 feet tall, into mechanical rooms at various levels throughout the four-level underground parking structure.

“There was no way we could possibly lower the pipe elevations in the building and still take the stormwater flow out of the building by gravity, so our treatment options were limited,” explains Kalach. “The hydrodynamic separator was an ideal solution for us. It didn’t require any head pressure, and we were able to hit the [combined sewer system] piping in the street to meet DOEE’s stormwater requirements.” Each CDS unit’s internal components (fiberglass flume and separation screen) were prepared and installed on the jobsite. A CDS unit’s internals are completely installed, sealed and mechanically fastened to the inside of the waterproofed precast structure.

According to Schmidt, the CDS units have a standard 2-foot sump for sediment capacity, so typically contractors just dig a hole deep enough to accommodate them. But because the Capitol Crossing units were going in a room, the design team had to ensure there was enough space for maintenance.

“It’s important to get the elevations right, because you want to be able to store as much water as possible in the downstream tank,” explains Schmidt. “You want your inlet pipe to come in at the top of the tank, which makes the outlet pipe from our structure higher. We also had to make sure we had enough clearance inside each mechanical room, above the CDS structure, to get a vacuum hose in to maintain the system.”

Waterproofing the CDS units was critical given their interior location, posing another set of design and logistical challenges. The units are cast concrete, and concrete is porous.

“This isn’t a problem when the units are installed below grade,” relates Kalach. “The water just goes through the concrete and into the ground. But if a CDS unit is inside a building, it can cause issues. You definitely don’t want to have water in a mechanical room.”

To remedy the problem, the units were shipped from one of Contech’s partner precast facilities, Gillespie Precast in Chestertown, Md., to a separate staging area for waterproofing. The units then were delivered in the correct sequence to the Capitol Crossing jobsite, where they were offloaded, assembled and installed in their permanent locations.

“Typically with systems this size, we’d do everything at the precast facility,” says Contech Field Consultant Dale Creech. “But with the unique situation we had here, we had to do everything in the field. It was quite a process.”

To date, Creech has worked on installing four of the six CDS units. During precast assembly, the waterproofing contractor seals the joints with butyl and Sikaflex sealant to contain the stormwater and prevent leakage. Creech prepares and installs the internal fiberglass swirl chamber and screen before sealing each system with Sikaflex for final use. The last two units are expected to be installed in fall 2017. Because of the distances involved on the jobsite, a 260-ton crane was required to swing the CDS precast and internal units into place. The precast structures are sealed with 2-inch butyl and Sikaflex. After the units are installed in their permanent locations, an 8-inch precast concrete slab is placed on top to finish the job.

Using preliminary calculations, the Capitol Crossing stormwater system design team estimated about 3.6 million gallons of rainwater—including flow from green roofs on top of each building—and 175 million gallons of groundwater will be available for reuse each year. The project’s rooftop green areas and water-recapture systems will be combined with a co-generation power system to generate heat and electricity for the entire development. Capitol Crossing’s filtered water will be pumped to rooftop cooling towers, and from there it will run to each floor to help cool the buildings. The project’s extensive water harvesting at roof and street levels is expected to retain more than 90 percent of the site’s stormwater, reducing potable water usage by 45 percent and landscape water usage by 50 percent. Water that isn’t used will be cleaned and released into the city’s combined sewer system.