Capturing the Iconic Red Rocks Park and Amphitheater from V1 Media on Vimeo. 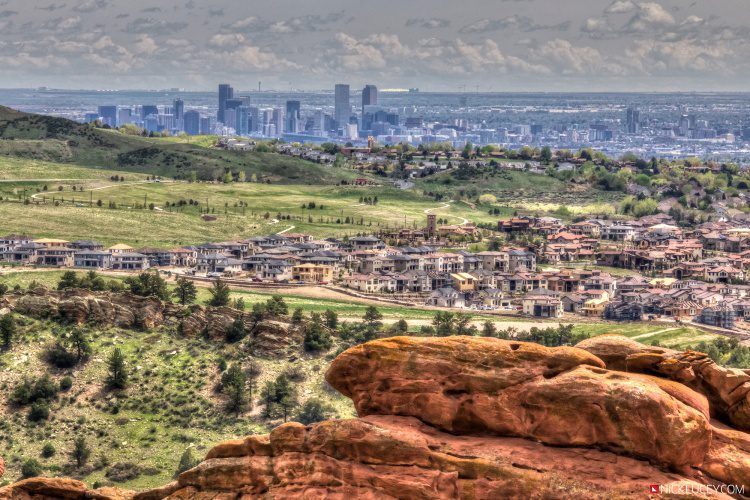 With a drone’s-eye view, a recent development just to the east of the hogback is visible. Thankfully, this development doesn’t impinge the view of Denver from most vantage points at the amphitheater.

Red Rocks Amphitheater and Park is one of the premiere concert venues in the world and one of the “crown jewels” of Denver Parks and Recreation’s many amenities. Further advancing its special stature, the park was recently named a National Historic Landmark by the National Park Service.

The rock outcroppings—including Creation Rock, Ship Rock and Stage Rock—form a natural amphitheater that has been augmented with seating, a stage, dining facilities, roads and parking. In addition to hosting concerts, the 300-acre venue includes trails that are a popular daily destination for Denver residents and visitors.

The city takes its stewardship of this area seriously, and although drones aren’t allowed in the park, it made an exception when approached by a team consisting of the engineering firm Kimley-Horn, software maker Autodesk and the drone manufacturer 3D Robotics (3DR). This group set out to capture the entire park using drones with a new streamlined workflow, providing the park with orthoimagery, oblique imagery and a 3D model. This data can be used as a historical archive as well as to guide management practices.

“Denver Parks and Recreation are interested in the model for lighting and sound design for the concerts that take place there,” says Bobby Valentine, firmwide project visualization lead, Kimley-Horn. “They’re also thinking about paving several parking lots to reduce erosion, and the model will be very useful to understand water runoff and plan for stormwater management. The model will also assist trail maintenance and facility management.”

Kimley-Horn was one of the first engineering firms to obtain a Section 333 Exemption from the Federal Aviation Administration (FAA) that allowed them to get a jump on the commercial use of drones. The firm committed to fostering this capability in-house, because they see it as an important step for improved project efficiency. There will no longer be a need for a special exemption from the FAA starting in September, which will make it much easier for everyone to use a drone for commercial purposes. 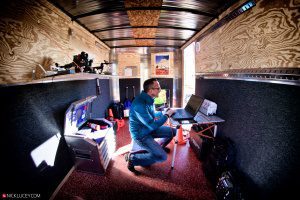 Bobby Valentine, firmwide project visualization at Kimley-Horn, gets set for a day of data collection.

“We see drone technology as a supplement to the things we already do,” notes John Heiberger, land-development engineer, Kimley-Horn. “Whether that’s going out and collecting imagery of a site for due-diligence purposes or reconnaissance, or whether we’re capturing detailed point-cloud data for design purposes, we’re looking at whether we can use an aerial platform more efficiently than traditional means of data capture.”

Capturing the full 300 acres of Red Rocks is a great project to test these efficiencies, as there’s a lot of variety to the terrain as well as a contrasting mix of the natural and built environments.

“We’re using drones for cell-tower investigation, bridge inspection, pavement surface analysis for runways and roads, and stormwater analysis,” adds Valentine. “In the past, we would use an SLR camera and climb features to get a top-down view. Now we can use drones much faster and easier while capturing more information.”

Red Rocks Park has been used as a musical venue since the early 1900s. The City of Denver purchased the area in 1928 and enlisted the Civil Conservation Corps and Work Projects Administration to provide the labor and materials to build seating and a stage that was completed in 1941.

There’s ample evidence that Native Americans used the site, and the area also has been a destination for hiking and climbing well before the amphitheater was built. At the top of Creation Rock, there are a series of chiseled stairs that visitors would scale to take in the expansive view looking back toward Denver. Although this vantage point no longer is accessible, the sunrise view from the top of the amphitheater draws many visitors, and the venue hosts an annual Easter sunrise service. 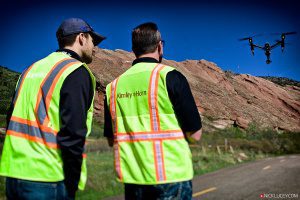 Bobby Valentine and John Heiberger from Kimley-Horn launch one of the 30 different missions needed to capture the entirety of Red Rocks Park.

“Originally, I was asked by a firm to recreate photographs from 80 years ago,” says Valentine. “Some of these photographs showed people in that period attire on the tops of these formations, which was quite amazing to me. They showed me the photographs, and we worked to recreate them with drones.”

The drones also were used to assist with one of the many pressures on the park.

“The drone allowed us get into inaccessible areas and fly into the caves to see where vandals had gone in and painted graffiti,” adds Valentine. “We helped them better plan how they were going to do the cleanup.”

In addition to delivering a complete and compelling high-resolution dataset to Denver Parks & Recreation, the goal of the Red Rocks data-collection project also was to bring together the three drone-collection components of surveying, drone hardware and data processing. Kimley-Horn helps with the surveying function; 3DR brings the drone hardware, autonomous flying and mission-management software in the cloud; and Autodesk has software integration, mapping software and cloud-based data management.

“The idea is to create an ecosystem of project engagements with Auto-desk customers to test specific UAS workflows and derive metrics around the benefits of those technologies on real-world projects,” says Tristan Randall, strategic project executive, Autodesk. 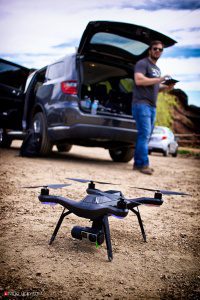 The 3DR Solo gets ready for takeoff, using a GoPro camera. 3DR recently partnered with Sony to incorporate its UMC-R10C lens-style camera capable of 20-megapixel images.

Autodesk has been working with 3DR for more than a year through a new development initiative called Forge, which allows hardware and technology partners to build on top of Autodesk tools. 3DR is one of the first companies to release a product from this arrangement, and its Site Scan software leverages the photo processing of ReCap 360 Pro as well as cloud processing from the A360 cloud.

“Autodesk is heavily invested in the drone ecosystem,” says Randall. “We’re finding that in order to use the data and derive value from it, it’s all about the downstream process of managing that data.”

3DR’s Site Scan software is used in conjunction with its Solo drone and includes two automated flight modes of “scan” and “survey.” The survey mode provides nadir images, and the scan mode captures oblique imagery; both combine to create imagery products and output a 3D model. Users typically use survey mode to capture the entire area and then go back with scan mode to capture more details for more vertical areas of interest. The scan mode puts the drone in an orbital path around a feature and takes oblique photos in a number of different steps. There’s also a more-manual “inspect” mode to capture imagery for trickier areas that are tighter or partly obstructed from above. 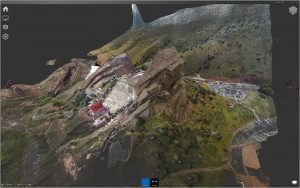 A composite model was created using terrestrial LiDAR data as well as images captured by drones.

After the drone data are collected, the images and mission data are uploaded to the 3DR cloud and then they’re uploaded to the A360 cloud for processing. Then they can be visualized via Autodesk’s mobile application or any of Autodesk’s online viewers or output to Autodesk software, such as Civil 3D, InfraWorks and Navisworks. The software also is integrated with BIM360 to drive efficiencies in construction.

“With the collaboration between 3DR and Autodesk, you can take a drone out and fly it, and have the data processed in the cloud and output to the Autodesk products we use every day,” says John Heiberger, land-development engineer, Kimley-Horn. “It’s really a game changer in the workflow that lets you use aerial data every day.”

The objective of the Red Rocks scanning effort was a consistent dataset with a ground sample distance of one inch or less. Flying at low altitude and with a high-resolution sensor, the drone can capture a dataset that rivals expensive photogrammetry cameras.

The all-day data collect in May 2016 was the third time members of this team collected data at Red Rocks. A previous drone data capture collected a lot of imagery of the amphitheater area. Members of the team also collected terrestrial LiDAR for a high-resolution ground-based point cloud of the amphitheater. This latest mission set out to test and evaluate 3DR’s new Site Scan software and Solo system and to capture the entirety of the park.

“One of the cool things about drones is that they’re perfectly complementary with terrestrial LiDAR,” says Randall. “Terrestrial LiDAR can capture the high-resolution ground-based view and you can fill in the inaccessible areas like rooftops with drone images.”

The team has carefully coordinated data collection so the data can be scaled and geolocated correctly and brought into one unified point cloud. Given the park’s size, a total of 30 missions were required to capture all the data. Managing these multiple missions and unifying the data requires a rigor that’s thankfully aided by automation.

“When you have mountains of SD cards and all of these jobs running on a desktop, and you’re manually inserting them and uploading them, it’s really hard to manage all of your data, particularly for a large project,” says Dan McKinnon, product manager at 3DR. “With Site Scan, you basically scan, upload and then visualize. It goes right into your project.”

The trajectory of drone advancement has been amazing to witness. Not since cellphones morphed into smartphones have we seen such a blistering pace of innovation. Developers and manufacturers have stabilized the drones, making the aircraft much more maneuverable and capable as well as easier and safer to operate, so they’re much more accurate and efficient data collectors.

“The three things that matter in the UAS space are automation, integration and simplicity,” notes Randall.

Those three goals are being addressed with the new Site Scan workflows intended to remove the “drone guy” and get these tools into the hands of project engineers and managers. With the barrier of complexity removed, drones for infrastructure projects and construction monitoring are set to take off.

“This technology is really transformative,” adds Randall. “Not only does it make certain workflows cheaper compared to other methods, but it opens up data capture to a new set of professionals who don’t have to be professional UAS operators. The tools are getting so easy to use that the idea of requiring expertise to operate this hardware is becoming essentially obsolete for many tasks in construction and engineering.”

3D Robotics started in the hobbyist and consumer world, but they quickly shifted to commercial operation with a focus on the easy and reliable collection of accurate data in a safe way.

3DR’s product roadmap is focused on site-driven organizations where the drone gains intelligence via repeat missions—it learns new things each time. The future vision also includes a direct and real-time connection to Autodesk software, where the drone informs all phases of a project. One can imagine a designer querying a drone for site details as well as getting notices about changes or deviations as they occur in the construction process.

“The ultimate goal of the product is to never have any user input,” says McKinnon. “To generally indicate an area that you would like to have scanned, and then the drone will go plan its own path and take all the pictures needed to generate a perfect 3D model in any situation, no matter how complex the site is or how many obstacles there are.”